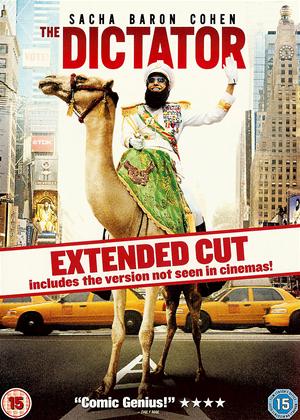 Reviews (1) of The Dictator

Some funny bits but not the best movie he has done... - The Dictator review by CP Customer

Ok movie but not best comedy he has done, some good funny moments though so worth a watch as did give me a good lol once or twice, recommend lower on watch priority list.

The humour that Sacha Baron Cohen has become so famous for, from his TV personality Ali G to his feature film performance as Borat runs riot in The Dictator, so much so that it I find it hard to believe anyone over the age of 15 is likely to find it even the slightest bit entertaining after the first fifteen minutes of screen time; and yet the story goes on for a further 68.

There is the surprising inclusion of the rather tongue in cheek notion that the real reason behind the UN’s attempt to bring about a democracy in Aladeen’s home nation is to gain access to the oil beneath it. Beyond this however I did not find a single aspect of this movie interesting, funny or provocative and leaving the theatre the only question on my mind was: “What the hell is Ben Kingsley doing in this?” The man won an Oscar for playing Ghandi for goodness’ sake; some mysteries I fear may never be solved, the intrigue surrounding my option of The Dictator however is quite obvious.