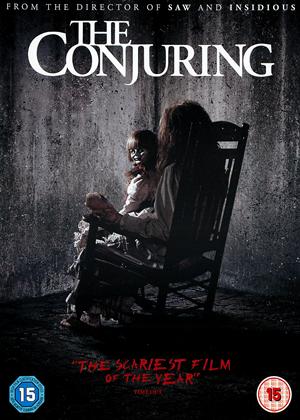 Reviews (4) of The Conjuring

Awesome - The Conjuring review by gazza

Best horror film I have ever seen. Very believable, well written and great acting through out 5 stars.

This is definitely one of the better horror films that has have been released in recent years. I really enjoyed the 1970s/retro feel of the story, this I definitely feel added to the storyline. There is absolutely no dodgy acting however the standout for me is definitely Vera Farmigo who make really convincing medium.

I have seen this before but wanted to remind myself. Good horror/ghost story. Well acted by the youngsters in it which is always good to see.

Spooky but noting new! - The Conjuring review by CS

For such a recent film, I found this quite disappointing from the point of view that it brings nothing new or original to the genre! Yes it's quite a good if not average horror story, uses all the standard twists and turns, dark shadows, doors banging, weird noises, a haunting, a possession, etc, but it's all been done so much before and often much better too! This film falls back on overused cliches and whilst it does give you a chill and a sense of fear, you could literally be watching any film from the last twenty years with the same storyline. In fact this seems to use the same themes and storylines that I've seen in many horror movies from the last decade or so! Also there appeared to be a bit of religious preaching going on, from the viewpoint that if you're not Baptised or Catholic, then you too could fall victim to some ghoulish possession, but these types of horror movies seem to always dwell on Catholism over any other religion!

Horror movies often hold off until the very last minute before all hell breaks lose and that often serves as a good formula as some of the best horrors of recent history have abided by this tried and tested technique (Cabin in the Woods, Saw). The Conjuring also bides its time but in the end there isn’t all that much to wait.

The film follows a family of seven as they move into their new house only to find strange things happening every night starting with the mysterious death of the family dog. As the ghostly things taking place get worse they call in renowned ghost hunters Loraine (Vera Farmiga) and Ed Warren (Patrick Wilson) to help rid their house of this otherworldly presence.

The film starts off with a cheeky opening sequence that introduces you nicely to this world of things that go bump in the night before dropping you in at the beginning as the film ratchets up the tension slowly but surely making for a tension filled first act as director James Wan ensures you will never see what's coming by constantly keeping the camera moving while carefully adding small but innocuous details into the surrounding shot.

It’s excellent direction as he maintains the films on edge tone but when the film decides to introduce its heavy handed message of family the film starts to falter as the tension disappears in favour of faux family moments shoehorned in to provide context to paper thin characters (pretty much all the children are there for is to scream).

The ending is understandably action packed but its never really scary thanks to the frantic pace of the story as the film tries to cram in resolution and meaning into a short yet eventful ending, one that lacks the kind of conclusion expected and doesn’t really connect on any level.

That being said it is a well put together film, just one that doesn’t really manage what it has set out to do as it settles into a fairly melodramatic family film that does have a few scares but not enough to really impress anyone.