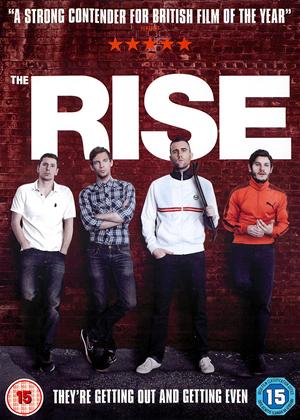 Synopsis:
When Harvey Miller (Luke Treadaway) was framed by local businessman Steven Roper (Neil Maskell) for a crime he didn't commit, he lost everything. After twelve months in prison he returns to his home town, apparently wanting nothing more than to be reunited with his closest friends and his lost love. But a year in prison gives a man a long time to think, and Harvey has a plan.
With the help of his loyal group of friends, Harvey orchestrates the most dangerous and ingenious revenge. But before they know it, the group are in far deeper than they ever could have imagined and the odds seem to be stacked against them.
Six weeks later, battered and bruised, Harvey sits in a police interview room facing interrogation. Clutching a stack of eyewitness statements, Detective Inspector West (Timothy Spall) has no doubt as to Harvey's part in a foiled robbery, and the attempted murder of Steven Roper. Denying nothing, Harvey agrees to tell his version of events in full.
What unfolds is an exhilarating, moving and often hilarious story of loyalty, jealousy, friendship, revenge and the pursuit of happiness.
Actors:
Matthew Lewis, Iwan Rheon, Timothy Spall, Luke Treadaway, Vanessa Kirby, Neil Maskell, Gerard Kearns, Lewis Rainer, Brad Moore, Paul Clayton, Mark Tristan Eccles, Gary Cargill, Lucy Fenton, Kelly Wood, Andy Calderwood, Neil Athale, David Zezulka, Peter Foster, Richard Galloway, Liam Tulley
Directors:
Rowan Athale
Producers:
Ed Barratt, Mark Foligno, Gareth Pritchard
Writers:
Rowan Athale
Aka:
Wasteland
Studio:
E1 Entertainment
Genres:
British Films, Drama, Thrillers
Countries:
UK

Reviews of The Rise

The Rise (aka Wasteland) review by George Hooper - Cinema Paradiso

Every year British cinema proves that there really is no one better at gritty crime dramas. The Rise continues this trend with a film full of political messages hidden behind a well crafted heist thriller with performances that elevate the sometimes odd scripting choices made by writer/director Rowan Athale.

The film follows Harvey (Luke Treadaway), a newly released convict who was framed for drug possession by brutal drug trafficker Steven Roeper (Neil Maskell). When he is released he puts a plan in motion to ruin Roeper’s life, a daring heist designed to bring Roeper to his knees. However he needs the help of friends Dempsey (Iwan Rheon), Dodd (Matthew Lewis) and Charlie (Gerard Kearns). However when things don’t go exactly to plan Harvey must contend with DI West (Timothy Spall) and the same police that incarcerated him in the first place.

A film concerned with the idea of what people deserve and what happens when you misjudge someone. Well directed but at times let down by its script, The Rise is a clever feature. The dialogue however walks the line between acceptably theatrical and all out pretentious as characters (characters in their 20s living on a housing estate in Britain) continually talk in metaphors and ideals while fitting in an occasional expletive just so you know their part of the working class. It’s condescending in its depiction of this world but still has a strong grasp of its story, enough to make the occasional philosophical ramblings unimportant.

Led by a killer performance by Treadaway, one to look out for in the future, The Rise is quintessential British cinema with at least one finger on the pulse of what drives modern Britain and those stuck in the doldrums looking for a way out. Rheon and Kearns prove equally impressive as Spall grounds the fantastical tale in reality, a human face behind the films guiding question of what is justice and in what way is it acceptable to find it?

Unexpected, twisty and most of all moving, The Rise hits highs and keeps on going even if it does unfortunately take a few pages out of the Cormac McCarthy playbook and discusses things that really don’t belong in a film as enjoyable as this.