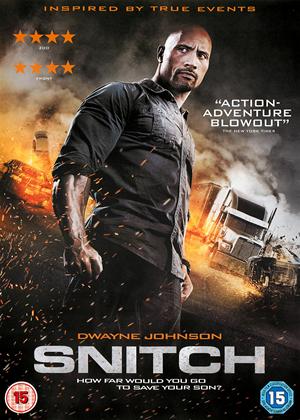 Is OK in that managed to watch it right through. Bit like watching part of a TV series. Same basic storyboard as many many other films.

Despite the fact that Snitch proves a mess of bad emotional beats and silly action sequences, I wouldn’t be quick to write it off for one reason. Snitch has the best Dwayne Johnson performance you will see. Unfortunately its attached to a slow, overly long vigilante thriller with nothing of any real importance to say.

Snitch follows John Matthews (Johnson), a loving family split between caring for his son from his previous marriage and the family he has now. When his son is arrested for drug possession he is forced to find those responsible to reduce the sentence. However to get close he needs the help of Daniel (John Bernthal), one of his recently paroled employees , someone intent on getting out of that world for good.

The film cuts its time between John’s quest for justice and Daniel’s family life. The film contrasts the two lives and the reasoning behind these two fathers actions as if to justify their insane antics. It’s clear the idea of family looms large in the picture and Johnson really makes you feel for John, a seemingly decent, reformed man whose descent into this criminal darkness threatens not only his new life but those he left behind in the old one.

John is a complex and interesting character given time and attention by scriptwriters Justin Haythe and Ric Roman Waugh but he stands alone among a bunch of stoic side characters, menaces without any menace from Benjamin Bratt’s effeminate cartel leader to Michael Kenneth Williams’ oddly chummy local drug smuggler, all the characters designed to create tension and complicate the plot all seem to want to be John’s good friend, even when Bratt’s character threatens to have him killed I presume its with kindness. It’s not all terrible as the film spends a hefty chunk of time at the beginning establishing John and its attention to detail makes for a compelling opening act but as the action starts brewing and the pieces start moving into place for the films ultimate conclusion/showdown the film loses any potential it once had thanks to a series of missteps that drags the film to a halt making Snitch among other things, a tiresome bore