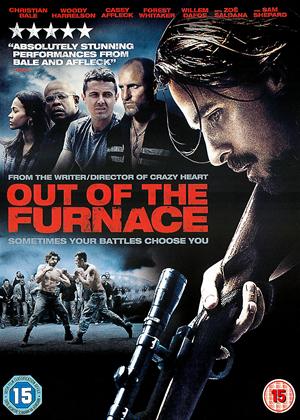 Reviews (3) of Out of the Furnace

WAC - Out of the Furnace review by JD

What a cast!! Forest Whitaker is not even in the credits. Bale outstanding, Harrelson award winning (should have), Casey Affleck (chip off the old b). This is a pretty violent, gritty and ugly film. The fight scenes are horrible. The subtle interaction between brothers is incredible. Only every tenth word spoken, the rest just brilliantly acted. Sad in a depressing way.

Brutal Waste of Talent - Out of the Furnace review by TE

A really strong cast is assembled to no good effect in this numbingly violent tale of macho pride and family allegiance.

The only interesting aspect is the depiction of the rust-belt background, with some good cinematography of both urban and rural wastelands.

Brilliant - Out of the Furnace review by EA

Great cast, emotionally moving and brilliant story-telling and cinematography. Christian Bale was a revelation and the rest of the cast was superb, although I thought Sam Shepard and Forrest Whitaker were a little underused. The fight scenes are gruesome and visceral ; necessary in the sense of not sanitising the macho mentality and the other violence is shocking (the 15 certificate surprised me). Christian Bale is brilliant in portraying emotional and moral ambivalence alongside good-heartedness.

Out of the Furnace review by George Hooper - Cinema Paradiso

Much like last years, nation in trouble drama Killing Them Softly, Out of the Furnace is a thriller wrapped up in a political sub plot that just consumes a story of family until there is nothing but social commentary. Sure Christian Bale is just as good as he always is but you end up feeling like you attended a politics seminar by the end of it despite its powerful themes of human corruption.

Following the lives of two brothers, Russell (Bale) and Rodney Baze (Casey Affleck). When Russell is put away for manslaughter his brother loses himself after returning from Iraq a changed man. When he gets consumed by illegal fighting he finds himself involved with the dangerous and deranged Harlan DeGroat (Woody Harrelson). However when things go south, a recently released Russell must fix the problem.

containing some excellent performances by Bale, Affleck, Forrest Whitaker and Willem Dafoe, Out of the Furnace is a masterclass in acting with an improvised feel with Bale and Affleck really getting to the core of the brothers often tumultuous relationship. The dreary exteriors and bleak look of their local town only adds to the pictures desperation with Affleck continuing a streak of high quality, emotionally powerful performances.

The main problem with Out of the Furnace is that every character seems to be on cruise control and they travel along a set path of self destruction. It may be the lack of prospects or the safety of doing things for family but everyone is the film is their own worst enemy. As people chose the moral thing over what seems right at the time the film paints its characters as almost saintly despite Russell’s parole status.

However director Scott Cooper doesn’t present this America as backwards in its isolation and its maltreatment of small town people, it shows a community apart but one of exquisite beauty. There is great compassion in the place Cooper presents even if the films tale proves one of darkness and despair.

Clear cut, a tad predictable but undeniably beautiful in its filming style, Out of the Furnace is a film trying for the big leagues with some quality performances but never quite making you feel that way you should as politics get in the way.