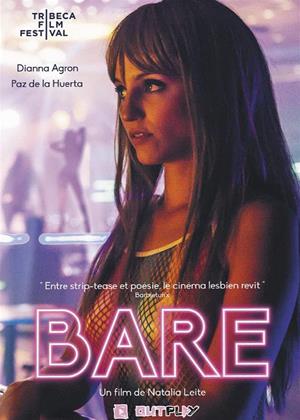 Bare is a movie devoid of hope. There is no chance for the young that occupy a rural hell hole littered with bars and strip clubs. They will find themselves doomed to lives of either minimum wage grocery clerks or shameless strippers. If you’re not born into royalty, your family is terrible and you have no motivating forces, your life is all but decided that you will end up a poor and redneck loser. If you’re lucky, you might make enough money to escape your dead zone of a life, but the chances are highly unlikely. A line of cocaine and a bottle of booze become your only means of seeking spiritual and philosophical enlightenment. Nothing significant will ever happen in this barren wasteland of fast-food and low income.

Such a tone and setting makes it incredibly hard to root for the likes of Sarah. There is not a single motivating figure in her life to help spring forth from her dreary job at the grocery store. She is bored, uninspired and so disinterested in the world that ignores her. Even her relationship feels stale and listless. It is not until she is fired, seeks a job as a stripper and forms a bond with female drifter Pepper that there’s a twinge of life in Sarah’s heart. But that spark just seems to come out of nowhere. There is no transition into the life of sin - one minute she’s a tired young adult working a cash register and the next she’s dancing on poles with powder up her nose.

The picture is peppered with many scenes of the desolate rural landscape and introspective music over close-ups of Sarah. Such staging might make some viewers believe there is something to more to this movie as though it were contemplating the mysteries of the human spirit amid such despair. But there is nothing there beneath that glossy service. The dialogue passages for these characters that do drugs while tripping out to VHS tapes in filthy homes is nothing unique or deep. Perhaps if you were under the influence, this might be a moving experience to mistake simple ravings and silent boredom for artistic gold.

There just isn’t any drama to any of this. One would think that Sarah’s desire to be a nude dancer would be met with hardship and moral concern, but seems to occur all too naturally. The same could be said for the rest of the movie that doesn’t build up to any of these major developments in Sarah’s life. In doing so, the picture becomes rather dull in how it feverishly skips ahead to key scenes that resonate to nothing. How boring does your movie have to be where the inner workings of a stripclub are blandly cliche? It’s times like these that I start to miss the ridiculous camp of Showgirls.

What’s easily the most tiresome aspect of the picture is how long these scenes with no emotional weight are dragged out for. The camera bounces around on one long-winded rant that ultimately says nothing, only to be upstaged by another more dreary one minutes later. We are never given much of any reason to care about these characters in how aimless their motivations seem to be. Maybe we’re supposed to hate them. Maybe the movie wants us to look down with disgusted pity on the geographically challenged of Americans who won’t make it past that western Wal-Mart. But why would that be entertaining?

The arthouse effect has overwhelmed Bare to the point where style trumps substance. A story about mundanity, drugs and strippers can’t just be about mundanity, drugs and strippers without passion. There has to be something more. Bare suggests that there isn’t much else there unless you strategically film the landscape and slather on the ambient soundtrack for that hipster perspective on Americana. I hated this type of magnifying glass when it was used in Gummo and I hate it just as much here.