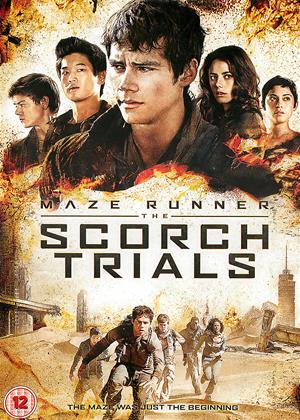 Rent other films like Maze Runner: The Scorch Trials

Although lacking the originality of the first film, there are enough exciting action scenes and decent acting from the young cast to keep it going. It is a shame that by the end it appears to have run out of steam and some of the blame has to go to the source novels for that.

The young adult blend of dystopian action comes forth once more with the second Maze Runner movie. What I’ve always seen as the main appeal of these stories is that younger audiences can see themselves as action heroes, triumphing over corrupt governments and their evil plots. In the case of Maze Runner: The Scorch Trials, the deck is stacked too high against our group of plucky young survivors. A movie series such as this is expected to get darker as it goes on, but it’s hard to be invested in its action spirit when one of the kids ends up committing suicide as his companions listen for the shot in the distance.

Plucked from the intricate maze of the first picture, Thomas (Dylan O’Brien) and his band of surviving young adults find themselves in a bigger world. But the outside world has grown dark and dreary with storms and decay. What brought on such a collapse of humanity? Zombies. They call them Cranks and they’ve been mutated by some virus called Flare, but they’re just zombies. How did this virus get out and ruin the world? Does it matter? It’s just zombies. There’s no grand mystery to this environment as there was in the first Maze Runner picture which held the intrigue of trying to figure out the mechanics of it all. The Scorch Trials trades in curious action adventure with a sci-fi twist for a plot that seems better suited for a Resident Evil movie. I had that vibe the second our heroes stumble into a lab doing biological tests to find a cure for the spreading virus. Those that escape the maze are referred to as the Immune. Seriously? You have to call zombies Cranks, but the immune maze survivors are given such a lame designation?

Further adding to the blandness of it all is just about every action trope in the book arriving on cue for every sequence. A tough guy is about to shoot our heroes, but a gunshot from behind reveals that a previous bad guy has turned coats. A big mechanical door descends to the floor leaving just enough time for Thomas to slide under it before closing. There’s even the expected double-crosses in the ranks and the simplistic dialogue of “Run!” and “Go!” in moments of intensity.

Director Wes Ball returns to direct the second installment and still has at least a pinch of flair left in him. There’s a brilliant sequence where two of the young survivors dash through a tapestry of downed buildings to avoid pursuing zombies with some great perspectives. But while Ball did have a creative eye with enclosed environment of the first picture, he struggles to weave an expanded world that relies more on explosions and gun battles with lots of computer graphic for both sets and stunts. It was neat to witness insect-like monsters of an intricate maze - not so much to see an airship loom over a demolished city. I’ve seen it in The Hunger Games, I’ve seen it in Divergent and I’m tired of it by the time I saw it again in The Scorch Trials. There’s only so many cloned elements of the genre I can put up with before it all starts to blur. And at this point this picture might as well be called The Divergent Hunger Maze: The Catching Scorch Trial Fire Insurgents.

As lukewarm as I felt about The Maze Runner, its sequel left me longing for the maze. At least in that environment of shifting walls and dangerous woods, there was a genuine curiosity about what the maze was and who created it. I couldn’t care less about the zombies of the outside world or the virus that made it happen or the cure being sought in these young people or the corrupt organization that is spearheading the conflict. Resident Evil hasn’t won me over with that structure after five movies and neither did The Scorch Trials. The series seems so out of ideas at this point that it actually ends with a “what should we do now?” ending.