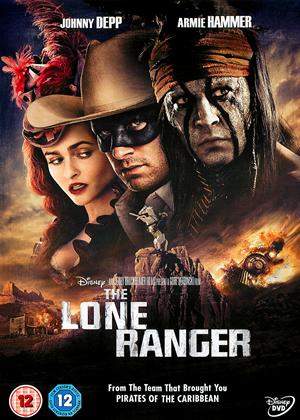 Reviews (4) of The Lone Ranger

Simply put if you are a Johnny Depp fan he does his stuff in the only way he and no one else can. For those Lone Ranger series puritans who think they are going to be watching a film made along those lines - think again. If you rent this you will be watching a western created in the same manner as the pirates of the Caribbean. Lots of action, little depth of script, slightly long winded - but fun never the less.

Better than expected - The Lone Ranger review by rb

A bit like Pirates of the Caribbean but not as much fun. Mainly family friendly but with a couple of rather dark scenes (cannibalism) and bizarre elements (the rabbits..). Great train chase at the end.

This film was mildly entertaining. Not as funny as I had anticipated but is definitely worth a watch for a lazy Sunday afternoon

With Johnny Depp and a trailer which looked very promising, I was expecting a wild west twist on the Pirates of the C. But I was wrong. I have never found the combination of violence and comedy works too well for me. In this film I felt the person that rated it a 12 was either asleep, or perhaps had seen too much nasty stuff over the years. One scene in particular where a dying man is horrifically killed made me think this: Would I want a twelve year old daughter of mine to watch that? Definitely not.

That aside, although there was much to enjoy in the film, it was not up to the Pirates standard. The only time it came close to being a really great film, for me anyway, was in the last ten minutes or so - a rousing version of the original Lone Ranger tune, Johnny Depp at his best, and a superb chase involving two trains.

Everything about The Lone Ranger reminded me of the beginning of The Pirates of the Caribbean series, not only because it stars Johnny Depp and is directed by Gore Verbinski but because it has the same light hearted adventurous tone while still being filled with a good chunk of darkness for good measure.

The Lone Ranger tells the story of John Reid(Armie Hammer), a well respected law man who is forced to don a mask and become a vigilante when notorious criminal Butch Cavendish (William Fichtner) escapes custody and leaves him for dead. He finds himself assisted by Tonto (Johnny Depp), a native American who also has a score to settle with Cavendish, the man who wronged him many years earlier.

Filled with the same farcical humour that made Pirates such a success, Reid’s quest for vengeance is not of the norm as this origins story twists and turns in ways a conventional action film wouldn’t to keep the viewer on their toes. Verbinski takes great pride in the way he conveys this story with the film really taking advantage of its excessive budget of $230 million to give you some of the best train related action sequences ever.

The film subverts the idea of the quintessential western as Tonto and John are not the normal western heroes. Filled with life and joy, these two are quite the opposite of the gunslingers made famous by Clint Eastwood and John Wayne. Never the less these characters feel right at home in this tale despite their unusual natures.

Hammer and Depp are great leads as they balance the dark and light elements of the story without spoiling the fun but the film really belongs to Fichtner’s Cavendish who is a delightful addition to the archives of great movie villains as he proves to be repulsive yet alluring as the devilish outlaw, an old school bandit from the westerns of yesteryear who brings out this films conflicts while leaving its wickedly funny centre intact.