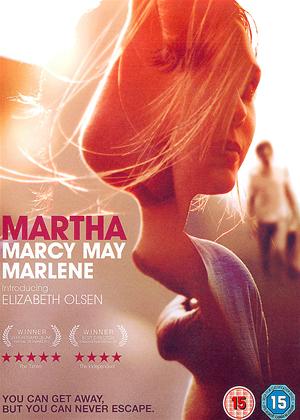 Reviews (3) of Martha Marcy May Marlene

This ambitious but deeply flawed film is basically the Manson Family story minus all the unwanted baggage that using the name "Charles Manson" would entail, in the same way that "The Master" is about Scientology but pretends not to be to avoid legal problems. This frees the writers to concentrate on the main part of the story - how rational people get sucked into irrational cults and end up doing bad, crazy things, and what it's like to be part of such a cult.

It's a great idea, but it's very poorly handled. One thing which kept bugging me was that the nameless cult portrayed in the movie didn't seem to actually believe in anything whatsoever, presumably in case some religion or other took offense. With absolutely no convincing reason given why all these young women thought their scrawny, unshaven lord and master was so special that they ought to let him control every aspect of their lives and bodies, I had the distinct feeling of watching a parable unfold in implausible ways just because the script said so.

It doesn't help that the characters are thin to the point of non-existence. The heroine spends almost the whole film so traumatized that she's practically catatonic, punctuated with flashbacks to her time as a not much livelier sexually-abused cult victim, and a few lines of hastily sketched-in backstory that supposedly justify her extreme vulnerability to the Rasputin-like powers of middle-aged weirdos don't really explain anything, let along make her interesting. Her sister and brother-in-law are pure cardboard, and far too slow to catch on to how profoundly damaged the girl obviously is. The other cult members have at most one personality trait each, and do almost nothing to move the story forward. And as for their glorious leader Patrick, we're told literally nothing about him. I suppose the idea was to make him enigmatic, but what it actually makes him is barely in the film.

With a livelier script in which more happened, and interesting characters whose motivations made sense (or at least existed), this could have been, perhaps not a masterpiece, but certainly the important film it tried to be. Obviously they didn't have anything like the kind of budget and resources available to Martin Scorcese, but the people who made this really should have sat down and watched "Goodfellas" first. In that film, we're shown in glorious detail why it's fun and thrilling and sexy to be in the Mafia. And then we're shown a downside so horrible that it vastly outweighs all that has gone before. In this one, credulous young fools are sexually exploited while voluntarily having a glum time on a farm for no reason at all. And then it gets even worse.

Maybe they were worried that if they made their deranged cult seem like a fun thing to belong to for even part of the movie, people might be inspired to rush out of the cinema and join real Manson Families or whatever. But for a film like this to really work, it needs to show the viewer why anyone in their right mind would want to be part of a crazy little sect in the first place, and it doesn't. Also, however dark and serious their subject-matter, movies are ultimately entertainment. The audience should, on some level, enjoy themselves. And I didn't.

Flying blind - Martha Marcy May Marlene review by AM

This film is one that's been floating around the edges for me since it came out. It was well received on release, and I heard good things, but missed it. And in the intervening 8 years, I kept hearing good things, and it's floated up and down the wish list for a while. Finally I put it on, principally because it was short running time and that suited me.

I was left cold.

I realised quickly how little I knew about the film s I put the dvd in, noticing the slip described it as a thriller. I vaguely thought it was a comedy, about 4 girls in New York. Of that, the closest I got right was that some of the film takes place in New York state. There is only one girl, played by Elizabeth Olsen, who uses three names in the course of the film, inside and outside a mysterious cult.

Elizabeth Olsen is holds the film together, playing some we slowly realise is suffering from PTSD. I don't immerse myself in the Marvel universe, and so I've only seen her in one other film, being equally excellent in Wind River. But the film never quite clicks. The how and why of the cult, its existence and Martha's arrival is left completely blank, and this leaves a void at teh heart of the film.

Slow and dreamlike reverie of an emotionally unstable girl (Elizabeth Olsen excels) and her struggle to escape the control of a religious cult. The film cuts between the commune and her troubled recovery with her family. A beautiful looking, thematically unresolved, troubling film