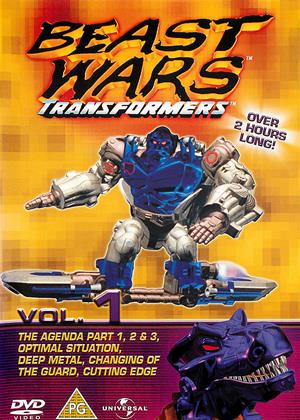 Transformers had always like an animated and toy phenomenon that was beyond my time. I was born in 1985 and the Transformers train was just starting to wind down as the likes of Teenage Mutant Ninja Turtles and Ducktales took over the airwaves. As such, I tried to watch the original animated Transformers series and just couldn’t get into it as an adult. What I could get more into, however, is Beast Wars, the computer-animated spin-off series. I’m willing to admit a tad of nostalgia harbors my joy of the show but the writing, in particular, has held up far better over time than the computer graphics.

It’s not even that the computer graphics were poor for the era. As the second show by Mainframe Entertainment (their previous being ReBoot), their work on computer animation is quite astounding considering they had to render characters who would not only emote with expression but transform into various animals. For the era, it looks quite good and is leagues above such stiff productions as Roughnecks or Max Steel, which debuted years after.

The story is pretty straightforward yet unique for sci-fi discovery. The warring robot factions of the Maximals and Predacons crashland on a mysterious planet. Rather than go into a hypersleep the same way the Transformers did in the original series, these Transformers awaken quickly to realize the war isn’t over. The planet they have landed on is ripe with their primary energy source of Energon. In fact, there’s too much Energon. All that exposure starts to affect their circuits and they could shut down permanently from such radiation. The only shield from the Energon is for them to transform into animal disguises.

That’s a brilliant setup to explain why the Transformers need to even transform, especially when they’re on a relatively deserted planet with no signs of human life. It also places a limit on their robot forms in battle, giving great limitations and excitement to their war for power. Naturally, their desires are to fix their ships and get off the planet or destroy the opposing side. Whichever comes first.

The characters fit the familiar archetypes of the original series. Optimus Primal is the obvious leader but he’s posed less as a deep-voiced commander and more of an understandingly empathetic hero. His comrades look up to him but he’s also capable of being more gentle and calmly trying to solve situations. Megatron, much different from the G1 version, also has a calm and calculated demeanor to his sinister plans for dominance and conquest. David Kaye also gives the character more of a personality with his refined dialogue and his simple catchphrase of ending all his scheme talks with a seductive “yes.”

While there is an overarching story about peeling back the mystery of the planet, there’s enough time spent over these first 26 episodes to really build up the characters. We get to see how Rattrap gets over his inadequacies to become a better hero. We get to see Taurantialous’ scheming backfire in his face with the way he tries to find his own selfish means of escaping the planet solo. There are also some unique scenarios where the bots are either blinded in combat or forced to revert to an animal form for the duration of an episode.

There’s also a great sense of humor to the show, present in both slapstick and character quirks. Rattrap gets in plenty of great jabs while Waspinator proves to be the naive villain of uncertain loyalties in a fight. Further characters are added to the cast as escape pods of unborn bots crashland on the planet, adding a ticking clock of getting to them first before Maximal or Predacon claims a new ally.

Beast Wars marked another cartoon from the 1990s that builds a bridge of generations. There’s lots of little Easter eggs for veteran Transformer fans and the writing is strong enough to be as capable as most adult science fiction. Having seen quite a bit of Transformers media, Beast Wars still remains one of the easiest to get into and with some of the best writing. Sorry, G1 Fans, but this show has held up a lot better over time and requires the least amount of lore tapping to truly appreciate.