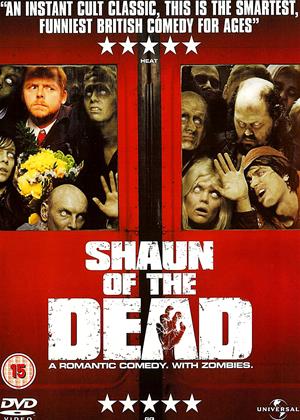 Synopsis:
Life is going nowhere for Shaun (Simon Pegg). He spends his life in his local pub, The Winchester, with his best mate Ed (Nick Frost), has issued with his Mum and neglects his girlfriend Liz (Kate Ashfield). When Liz dumps him, Shaun finally decides to get his life in order. He must win back the heart of his girlfriend, repair his relationship with his mum and face up to the responsibilities of adulthood. Unfortunately, the dead are returning to life and attempting to eat the living. For the newly inspired Shaun, this is just another obstacle.
In the face of a full-scale zombie epidemic, armed with a cricket bat and a spade, Shaun sets out with Ed in tow, to rescue his mum and grudgingly his step-dad, his girlfriend and even more grudgingly her friends David (Dylan Moran) and Dianne (Lucy Davis) and take them to the safest most secure place he knows, The Winchester.
Actors:
Simon Pegg, Nick Frost, Kate Ashfield, Lucy Davis, Dylan Moran, Nicola Cunningham, Keir Mills, Matt Jaynes, Gavin Ferguson, Peter Serafinowicz, Horton Jupiter, Tim Baggaley, Arvind Doshi, Rafe Spall, Sonnell Dadral, Samantha Day, Trisha Goddard, David Park, Finola Geraghty, Bill Nighy
Directors:
Edgar Wright
Producers:
Nira Park
Voiced By:
Keith Chegwin, Rob Brydon, Julia Davis, Mark Gatiss, Robert Popper, David Walliams
Writers:
Simon Pegg, Edgar Wright
Studio:
Universal Pictures
Genres:
British Films, Comedy, Horror
Countries:
UK

Reviews (3) of Shaun of the Dead

Enjoyable spoof - Shaun of the Dead review by CP Customer

Good to watch for escapism and entertainment when your mind doesnt want to concentrate too hard.

Shaun - Shaun of the Dead review by CP Customer

You'd be forgiven for approaching this film with caution. One often does when a new British comedy comes along, hoping for the best but secretly fearing the worst. But with Shaun Of The Dead we needn't have worried.

Described as a rom-zom-com, or in everyday language, a comedy with zombies, it stars co-writer Simon Pegg and is directed by Edgar Wright. And they've done a tremendous job with both script and direction.

It's a comedy but it's also quite horror film to boot. And it's clear that whilst Pegg and Wright have comedy in the forefront of their minds that they have also set out to take us on a journey that involves a range of emotions. Most interesting is the surprisingly well timed pathos as the characters are forced to kill or be killed.

The characters are all believable, the most distinctive being Shaun who makes a personal journey of self-discovery, from general layabout, to unlikely leader and ultimately a heroic figure.

Nick Frost and Lucy Davis contribute with good performances although Davis' character fails to feel unique as it's very similar to her character from The Office. In fact when Andrew Lincoln cameos, you almost expect her to run off with him.

Hopefully this year's Hot Fuzz will be just as brilliant.

Multi-layered - Shaun of the Dead review by RD

Comedy genius. This film needs to be watched multiple times to appreciate all the subtleties.

The first half basically being a rehearsal for the second half.

And the classic lines: