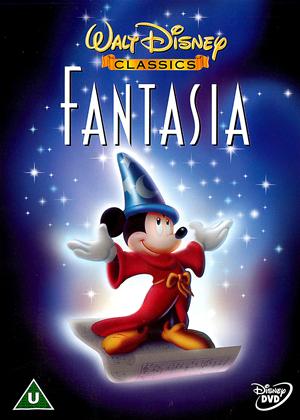 Has to be 5 stars, this 'masterpiece' may be patchy but the best bits are un-missable! - Fantasia review by CP Customer

Wow - it's probably 40 years since I last saw this and when I saw that it was only available on Blu-ray - this was enough of an incentive for me to acquire a Blu-ray player over Xmas just to be able to see it again! And I have to say, no regrets. It's going to be difficult to send this one back! The Nutcracker Suite, Bach's Toccata and Fugue are just so special that you should watch this for these pieces alone!

This 1940 animated film produced by Walt Disney consists of eight well-known pieces of classical music performed by the Philadelphia Orchestra (conducted by Leopold Stokowski), each with a short introduction. It was a major innovation - and included the first commercial stereophonic surround sound (1940!!). The original underwent a major restoration in 1990.

Interesting, entertaining, informative? Well, yes, I guess a bit of all three - but most interesting is just how dated the more abstract imagery is, compared with the more conventional Disney style (Mickey Mouse, the ostriches snd the Hippo). The centaurs, cupids and fauns are just sickeningly cutey-pie.

Beautiful to Observe, But Not So Much to Watch - Fantasia review by CR

In all respect to this movie, I give the people behind this credit for trying something so wildly different than what anyone else has done. This movie was, essentially, what gave birth to what we nowadays call music videos, after all. And needless to say, the animation for each one of these world-famous works of classical music is top notch, matching flawlessly with the music that the orchestra is playing.

But I'm not gonna lie, there were a lot, and I mean A LOT of times where I was just begging to press the fast-forward button watching this one. It's strange that I'd be complaining about how much this movie drags, because I'm usually don't mind more sluggish films like Good Night and Good Luck, or Mr. Turner, or The Hours as just a handful of examples. But there's something these movies have which this movie lacked... lead characters! The only shorts in this movie with a distinct lead character is The Sorcerers Apprentice, which is why I think it's the most famed of the shorts, and arguably Night on Bald Mountain. But the rest of the shorts don't choose one character to stay focused on, but instead kind of jump between them all as extremely random events happen around them, without them ever really being developed or given any purpose.

I also found that I wasn't really learning that much from this movie. I learnt that there are certain kinds of music that do or don't tell a story, hence the lack of lead characters in these shorts. But otherwise, all the narrator does is spoil what little happens in each short before it happens. So, there's not even an element of surprise to look forward to.

Many regard this as one of the greatest animated films ever made. And whilst I admire what this film has inspired, I'm afraid the magic just didn't click with me for this film. I know a lot of critics love it, but personally, I'd rather skip to the next track.