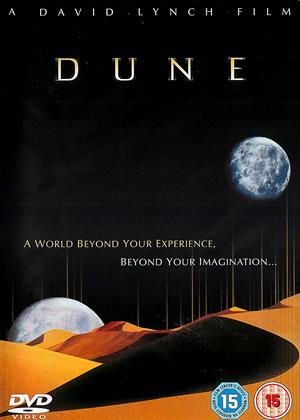 I seem to have watched rather a lot of sci-fi films recently - and here's yet another...

Frank Herbert's SF novel 'Dune' and its five sequels are to science fiction what Tolkien's 'Lord of the Rings' is to fantasy. 'Dune' is perhaps the world's best selling SF novel and the scope of vision, the complexity of the future it depicts and the richness of the characters and life on planet Arrakis make a filmed version a tricky proposition.

And so it proved. I first read the book at school in the 1960s - and was captivated. I saw the film at the Odeon, Leicester Square in super wide-screen 70mm Todd-AO way back in 1985 - and was seriously disappointed. Although accurate to the book in many ways, the vision of Arrakis and particularly of the central character Paul Atreides (played by a too-old Kyle MacLachlan) was simply out of line with my own imagination.

'Dune' was directed by David Lynch, known for his almost surrealist vision. At the time he had made only two films, 'Eraserhead' and 'The Elephant Man', so it was a bold and (with hindsight, given his later work) an inspired choice. While neither myself nor the critics nor indeed many 'Dune' fans were over-impressed by the film when first released, it has since become somewhat of a cult classic.

The film can be criticised in many ways, from the over-the-top characterisation of Baron Harkonnen, the poor casting of Gordon Sumner aka Sting, the too-often repeated 'Prophecy Theme' portion of the soundtrack, and the changed ending (rain on Arrakis would have destroyed the unique ecosystem of the planet). But watching the film again on disc - not having seen it for over 30 years - I'm somewhat more forgiving. Yes, by today's standards the effects are clunky, the acting a tad unconvincing (isn't that always the way with an ensemble cast?) but other than that I rather enjoyed it. And - again with hindsight - Lynch's vision of the mutated Guild Navigators, while bizarre, is rather good and quite effective, as is the depiction of the stillsuits.

I enjoyed it more than I thought I would. 4/5 stars, but it's a film for fans.

[Aside 1: If you enjoy SF, I encourage you to read 'Dune', preferably before watching the film. It will certainly make it easier to follow! And if you've read the book, I also recommend that you seek out a copy of the hard-to-find 'Dune Encylopedia', a fan-written guide to the Dune universe. But do avoid the (IMHO) awful sequels and prequels by Kevin J. Anderson and Brian Herbert]

[Aside 2: Both the single disc DVD and the Blu-ray versions are poor. The best version is the 2-disc UK Special Edition DVD; this has a restored 2.35:1 widescreen version of the film and 5.1 sound (but regrettably no subtitles). You should be able to pick up a 2nd hand copy from the usual places...]

[Aside 3: If any viewer wonders why the future appears largely mechanical, with nary a computer to be seen, even as an aid to space navigation, this is as a result of the Butlerian Jihad during which all computer-based technology was destroyed. I told you that you needed that 'Dune Encyclopedia'!]

The last line and the start of the closing credits sums it up. A person says in a silly voice something that after 2 hours 10 minutes doesn't make any sense then it cuts to rubbish 1980s music with the casts pictures appearing next to their names in comedy fashion.

One minus point for the word "spice", "worm" or "chaska" being used. Minus point for annoying whispered dialogue. Also minus points for stilted dialogue, flat characters and crappy costumes. Many minus points for large bits of the story line being cut (although frankly even if it was put back in the film would still be terrible). The whole thing is rushed and doesn't make much sense in parts. Give it a miss and watch nearly any other non-low budget sci-fi.

Tried to watch this but turned off after an hour, really rather boring and not worth watching in my opinion.