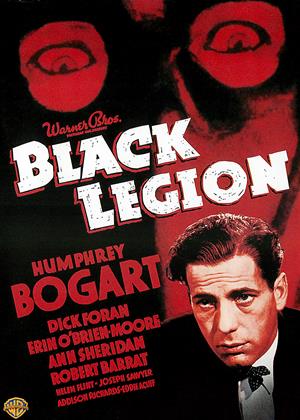 How can one of Humphrey Bogart's best performances be in the shadow of others that are more widely known? Such is the fate of the prolific. He appeared in many a routine work for Warner Brothers during the Thirties, but Black Legion (1937) is in a class apart. Bogart, who works in an engineering factory, hankers for promotion so that, in the suburbs, he can treat wife and son to more (even a vacuum cleaner) – and himself to a smart automobile whose salesman, typically, tells him that this is the only one in that colour at the moment.

What Bogart – that voice! - takes for a natural progression falters when the foreman's job is given to a Pole who has made much of studying, on the job and a night school. Sour, Bogart becomes so embittered, the voice heard through booze, that he is a prey, via a weasely chemist, for a hooded Klan-like bunch whose campaigning method is, in effect, Put America First: it signs up adherents beside an open-air fire upon which they will be roasted if they do not fork out for cut-price revolvers.

All this has transatlantic, indeed worldwide resonances now. What one should stress is that its effect not only derives from those night-time scenes (so well caught by director Archie Mayo with the help of Michael Curtiz, himself an immigrant), but the many domestic ones. The kitchen sink is as prominent, with radio broadcasts providing some relief, as do excursions to the movies (the posters seem, at a glimpse, to be parodies of Warner titles). What's more, after one film, another couple go for a drink nearby. This is, in effect, Nick's Bar. The eponymous Nick Strumpas is played by Pat C. Flick, who wields the most extraordinary eyebrows this side of Groucho (he wrote screenplays as well as making such appearances).

Graham Greene reviewed this film, prominently, in the second issue of Night and Day magazine. Unlike me, he could not then have punned upon the Rick's Bar of a few year hence, but Greene knew where “the real horror lies: the real horror is not in the black robes and skull emblems, but in the knowledge that these hide the weak and commonplace faces you have met over the counter and minding the next machine”.

He was then at work upon Brighton Rock. One cannot help but feel that films such as this had an effect upon his Pinkie. He also remarks upon its ending, which remains an equal point of discussion about his novel, in print and on screen.