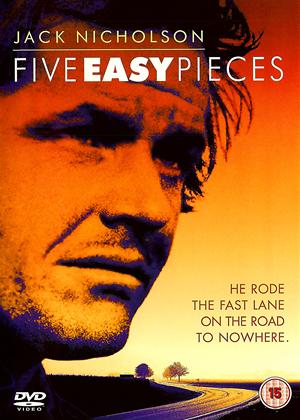 I first saw this film in 1972 I think – it was showing at a local film club. It impressed me then and I'm still impressed 40 years or so later. So what is it that impresses me? The acting (Jack Nicholson and Karen Black are excellent), the photography (excellent, from California to Washington, and the character shots), the music (the use and contrast of country and classical pieces). But not the story – there really isn't one: it's a character study, the character of what a few years earlier in the UK we would have called an 'angry young man'. Bobby Dupea (played by Jack Nicholson) is angry with the world, with his family, with his girlfriend, his friends. He has run away (yes, I think that's the right description) from an intellectual, musical family (he's a classically trained pianist) and ended up in a number of dead-end jobs – he is currently working as a roughneck on an oil rig. He has a dead-end girlfriend (Rayette Dipesto, superbly played by Karen Black), a waitress with big hair whose idea of 'music' is country & western. She adores Bobby, but he can't or won't return her affection. Learning that his father is ill, they head for Bobby's family home where Rayette sticks out like a sore thumb and Bobby defends her, but eventually runs away from her yet again. I think the film can be best summed up by a quote from his brother's fiancée with whom he has a brief fling: "If a person has no love for himself, no respect for himself, no love of his friends, family, work, something... How can he ask for love in return?". Directed by Bob Rafaelson whose previous claim to fame was creating 'The Monkees', 'Five Easy Pieces' is a superb piece of filmmaking. It was nominated for 4 Oscars, and Karen Black won a Golden Globe award. 5/5 stars – highly recommended.