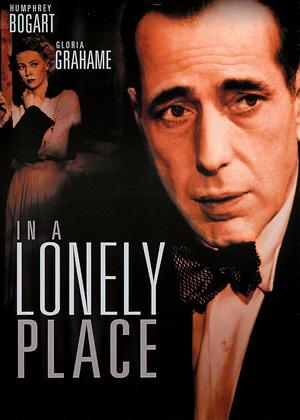 Reviews (1) of In a Lonely Place

Bogart plays Bogart - In a Lonely Place review by RhysH

This is the finest example of Bogart playing Bogart. I note he was the producer of the film so was able to set up the perfect Bogart masterclass. He gets some great brooding scenes, some full blown scenes of anger and, of course, some witty and vitriolic one liners. Nobody smokes like Bogart complete with the picking of the stray bits of tobacco from the tongue.

The plot is quite slight, Bogart plays Dixon Steele, screenwriter and main suspect in a murder. The main investigating detective never leaves his office and the other detective invites Steele around for dinner where Bogart gives a hypnotic performance of how the murder might have been committed. The main witness for Steele's defence is Laurel Gray who lives in the apartment opposite, wonderful cantilevered support from Gloria Grahame. The two fall in love and this, of course unlocks the writer's block. There is a genuine rapport of love between the two.

And oh, the hair. The women look as if their perms have been sculptured out of marble. Even after a restless night Gloria Grahame emerges in beautiful array, make up and hair intact.