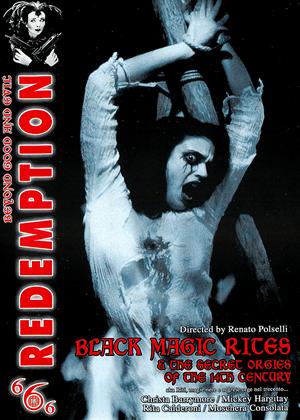 Not released
Nude for Satan

Elongated scenes of gaudily coloured sacrifice, always involving manicured young women; the soundtrack of a hundred baying night-wolves; solemn, robed males; the blank-eyed corpse of the long-dead Isabelle; pulsating, recently removed hearts. It’s all here, folks, directed in a deliberately disorientating manner by Renato Polselli (who also wrote this), in a style very close to that of Mario Bava.

Isabelle (Rita Calderoni) has been burned to death, accused of witchery. A group of vampires keep her body, greyed and damaged, and sacrifice virgins in a bid to bring her back to life. Into the protracted maelstrom comes Laureen and her fiancé Richard Brenton and bless me! She’s the living embodiment of the long-dead Isabelle. Much wailing and screaming ensues – you needn’t worry too much about the storyline (there are many flashbacks outlining what is going on, but even then it is not made clear that they *are* flashbacks, which helps the dizzying incomprehensibility nicely). I found myself just enjoying the crazy exploitation style of it all, and basking in the long-gone European atmosphere. The very effective musical score from Romolo Forlai and Gianfranco Reverberi only serves the enhance this.

It’s difficult to comment on the acting. There’s not a lot of scope for emotion outside screaming and gnashing of teeth, all of which is entered into with gusto, and much of the moans bleed into the soundtrack. The women are invariably half-dressed and beautiful, the men fully-clothed and substantially less picturesque. There are some incredible, briefly seen Italian locations, and the set design leaves you in no doubt you are watching a richly gothic horror film. If you aren’t convinced, Dracula himself makes an appearance amidst it all. He gets everywhere, that old Count.

I quite enjoyed this for what it is. It’s loud and it’s relentless and some of the set-pieces are eerily effective – but after the brief end credits rolled, I was ready for something else.