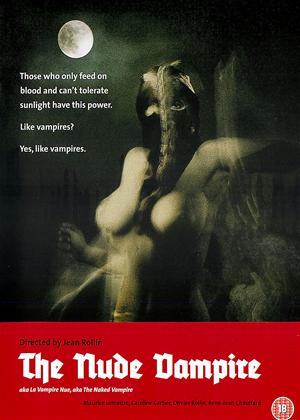 Reviews (1) of The Nude Vampire

Men in folky animal masks pursue, imprison and monitor a young lady (Christine François). The imagery is at once bizarre and unsettling, but it doesn’t stop there. We see Cathy and Pony Tricot next, French Director Jean Rollin’s Castel twins as maids, dressed in extraordinary metal and spike-adorned fetish gear. They don’t speak initially, just observe in a detached fashion and tend to the members of the house. Their presence is sprinkled throughout the film; always they are resigned looking, forlorn and fascinating.

Olivier Martin (actually Rollin’s brother) is Pierre Radamante the hero of the piece, typically rather fey nevertheless provides a welcome wholesomeness in the face of so much apparent evil and strangeness. His father Georges (Maurice Lemaitre) is the head of the organisation that has enslaved the young girl, and his secretary Solange (Ursule Pauly) is his nefarious subordinate.

The young girl is being enticed as a form of spectacle for the mask-wearing guests of the house, tempted by blood. It seems as if she is a vampire and they are a secret suicide cult hiding under a veneer of respectability. There are long periods where there is no dialogue, and this at the film’s beginning, revealing no compromise to the telling of the story. It is there, but you need to pay close attention. It is a good half hour before any explanations are forthcoming.

At times this can be ponderous: scenes are inserted for their own sake that appear to have no bearing on anything else. The ending could almost be seen as a tribute to the Universal films of old (watching ‘House of Dracula’ is cited as one of Rollin’s formative horror experiences) with masses of people (lead by Michael Delahay nicely underplaying the Grandmaster, a role he would repeat in the following year’s ‘Le Frisson des Vampires/Shiver of the Vampires’) with fiery torches descending en masse.

The apparent death of the evil Solange is accompanied not by strident music, but simply by the guttural shrieking and bleating of night animals, making her demise an isolated, detached affair. Solange is responsible for the unforgivable act of injuring, or possibly killing, the twin maids in one of the film’s most notorious sequences. Knocking them both down with an iron candelabra one twin falls all the way to the bottom of the lengthy flight of stairs, in actuality knocking herself out in the process! Luckily, they both appear later, bloodied but alive, and it is due to them that Solange meets her fate.

The Castels appear sporadically throughout Rollin’s films (though sadly not in his retrospective ‘La Nuit des Horloges’ (2007) – at least not outside the archive footage used to represent them). They are more effective than ever here, the stars of the show. Dark haired, dressed in a variety of eccentric costumes, they are mainly unspeaking. Inexperienced as actors they may have been, but their twin presence is extraordinary. Even an uneventful scene of them going about the business of changing clothes or procuring refreshments for their masters or slowly descending stone stairs with their crackling fiery torches, is enlivened by their other-worldly silence, their silent observation of each other’s actions. ‘The Nude Vampire’ is their greatest achievement, and the overall alien atmosphere would have been far lessened without their contribution.

The end of the film, customarily filmed on ‘Rollin’s beach’ in Dieppe, provides the platform to reveal the imprisoned young girl was never a vampire, indeed there have never been such things as vampires (!) – rather, she is a mutant. The nature of her condition is unspecified, but it seems to be impervious to bullets and display distinct vampiric tendencies. Indeed, these mutants are what the human race will become.