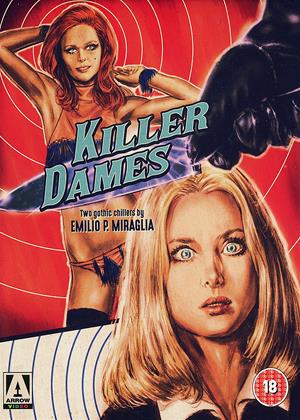 Rent other films like The Red Queen Kills Seven Times

The number seven crops up more than once in Giallo films – ‘Seven Deaths in the Cat’s Eye’, ‘Seven Blood Stained Orchids’, and this. Doll faced beauty Barbara Bouchet plays Kitty, surviving sister to Evelyn, a precocious, violent creature, who has seemingly perished. However, events seem to emulate the old family curse in which, every hundred years, the ‘Red Queen’ is raised from the dead to kill seven times. Classic images of stabbings by an unknown black-gloved figure with dark hair and a red cloak (1973’s ‘Don’t Look Now’ imagery seems to owe a lot to this) follow.

Red actually crops up rather a lot in this, on clothes and cars – splashes of crimson in the midst of pleasingly rainy night scenes; either a subtle clue as to the identity of the killer or a ‘red’ herring.

Magnificently moustachioed Marino Masé plays the chief inspector (Toller), the dapper gentleman trying to unravel this enigma, whilst looking uncannily like Freddie Mercury in certain scenes. This whole dark mystery is presented very much as a television horror/thriller than a film – more so than most giallos, I’d say.

The ghost-faced killer is featured only very sparingly, which is a shame as she is featured prominently on promotional material and looks effectively sinister.