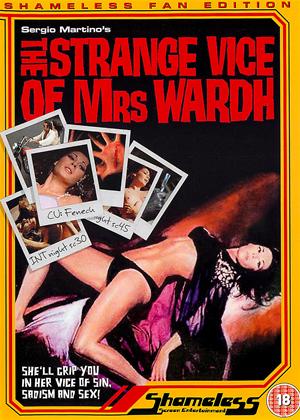 Rent other films like The Strange Vice of Mrs. Wardh

Reviews (1) of The Strange Vice of Mrs. Wardh

Attractive, confident and haughty, Mrs. Julie Wardh (picturesque Edwige Fenech) has a plethora of men interested in her. Husband and lovers, some more depraved than others, pursue her in this heady, fast-moving chiller. What makes her increasingly fragile state of mind worse is the knowledge that she also appears to be haunted by a series of vicious killings. A coincidence? Her new lover, George (George Hilton) is somewhat intense. Could he have something to do with it all, do you think?

Otherwise known as ‘Next!’ ‘The Next Victim’ and ‘Blade of the Ripper’, this has acquired a reputation as one of the best giallo films, and it is not difficult to see why. The pace does not falter, it is very tightly written and the wonderful twists are delivered with expert ease, and don’t let up until the very end. The locations – as in many such productions – are mainly real, not studio sets, and as such are packed with colour and detail, from every rusted radiator to flaking window pane, and the lush expansive exteriors are never less than breath-taking. The direction, by Sergio Martino is faultless (at one point a letter, delivered with flowers to Wardh, reads: ‘Your vice is a locked room, and only I have the key’, which is also the (English) title of another of Martino’s giallo films).

For many films of this period, females are portrayed as pretty feinting screamers for pretty brave males to rescue, and yet here, Wardh has every reason for hysterics (Fenech is a legendary performer, due in part to this film – she has since become a prolific producer; her most recent film acting credit is in ‘Hostel 2 (2007)’) as she is given no respite in between scares and attacks. Crucially, the audience is entirely with her throughout, which makes the fact that she really doesn’t appear to stand a chance that much more powerful.