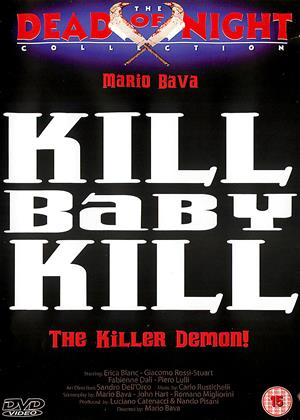 Sugar and spice and all things nice? Not this little girl... - Kill Baby, Kill review by Count Otto Black

This excellent Italian horror film has one howling defect, and that's the incredibly silly title the English language version ended up with. This isn't a slasher movie about a psycho nympho bimbo or anything remotely resembling one. It's a ghost story spiced up with vampire movie clichés, which it uses with far more ingenuity than you'd expect to find in a lurid tale of superstitious villagers being picked off by something that won't stay dead until a square-jawed level-headed hero arrives to save them.

Mario Bava, a very clever man who made films in rather stupid genres, has tremendous fun setting things up to play out just as we expect them to because we've seen a hundred movies just like this, then doing something completely different. When we meet the aforementioned handsome, brave, and incurably rational hero, along with such stock characters as the sinister shaven-headed burgomeister, the sexy raven-haired witch-woman, and of course the surly locals who instantly go very quiet when a stranger walks into the tavern - a moment this movie exaggerates so much it becomes a deadpan joke - we know what they're all here for.

Except that they aren't. The villagers may cling to useless superstitions, but modern science is just as powerless in the face of a breakdown of consensus reality as nightmarish as the oddest scenes in "The Shining", which I suspect was influenced quite a lot by this obscure and modestly budgeted film. It's somewhat gory in places, but it mainly achieves its scares by putting the increasingly bewildered hero in a literally nightmarish situation where everyone's terrified all the time, the closer he gets to solving the mystery the less sense it makes, and although it's all sorted out at the end because it has to be, some of what happens along the way makes no sense whatsoever. And the movie is all the better for it.

Bava knew perfectly well that his sets were often too cheap to convince anyone they were really outdoors or made of solid stone, so if he abandoned realism and bathed everything in garish lighting that often borders on psychedelic, audiences would be accept this unashamedly fake world better than they would a poor copy of the real one. Roger Corman's Poe pictures starring Vincent Price and many Hammer films used the same trick, but Bava was especially good at it, partly because he understood that once you've crossed that line you might as well turn it up to 11.

It's not a perfect film. Some of the acting is terrible, even if you watch it with subtitles rather than dubbed. The designated hero's almost total helplessness adds to the eerie feeling that you're watching somebody else's nightmare, but it also makes him literally a waste of space, especially as he's not a great actor. And some of the scenes in which supernatural forces give it all they've got are compromised by the low budget and end up being a bit ghost-train-ish, or save even more money by conveying paranormal disorientation with footage of a spiral staircase shot from unusual angles that we see a little too much of. But as films of this type from this era go, it's one of the best, and it has enough imagination to prevent the viewer from guessing exactly what's going on long before the characters do.

I think this is the very first Scary Little Ghost Girl movie, and it puts its seemingly harmless apparition to genuinely disquieting use. For its time, it's as good as all but the very best Hollywood could achieve on far bigger budgets, and because it's not from the USA or Britain, it dares to be a bit nastier than you might expect. It's little-known these days, perhaps due to the absence of "cult" actors, and I don't suppose that idiotic title helped, but if you're a fan of the genre it's well worth an hour and a half of your time.