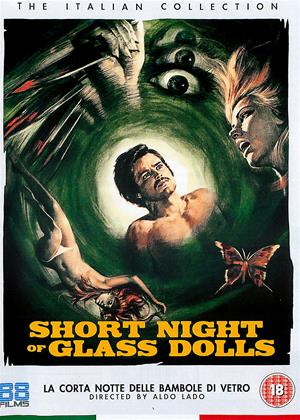 Rent other films like Short Night of Glass Dolls

This odd, erratic, and rather muddled film is difficult to categorise. The labels it gets here are "Horror" and "Satanic" (and "Classic", though on this site that just means it's a film), but like a lot of Italian movies from that era, it doesn't care which genre you think it's in so long as you know it's for grown-ups, and the 18 certificate tells you that much. Though as seventies Italian 18-cert movies go, this one is very non-violent indeed, that 18 classification being for nudity and sex, almost all of which is in one scene that's less explicit than silly.

As Poe observed in "The Premature Burial", being buried alive is one of the scariest things you can possibly imagine, especially if you're fully conscious while it's happening but completely paralysed so you can't indicate that you're still alive, and that makes it an excellent basis for a horror story. Movies have been showing us variations on this truly nightmarish theme since "Vampyr" in 1932, but seldom as ghoulishly as this one does, since the poor chap isn't merely awaiting his burial; they're going to perform an autopsy on him first...

Yet it's not really a very scary movie. Since our hero turns up "dead" in the first scene and the whole story is told in flashback as he awaits his ghastly fate, there's no suspense until the last few minutes because what are the chances that the narrator will be dissected before the end of the film? Also, we have nearly 100 minutes to get used to his predicament, safe in the knowledge that it'll be about an hour and a half before it becomes significantly worse, and since that's the only true element of horror, there's not a lot else to be scared of.

"The Wicker Man" works because, right from the outset, the hero is surrounded by people so weird that Summerisle might as well be on another planet, and we've got a fairly good idea of what's going on all along. This film doesn't work nearly so well because it's essentially an atmospheric though not exactly action-packed thriller about an American journalist trying to find his vanished girlfriend in a Communist country whose cops are unhelpful to put it mildly, which for almost its entire running-time looks as though it might be leading up to the discovery of a series of sordid but fairly ordinary sex crimes, with an oddly irrelevant horrific framing story that feels like a short film edited randomly into a completely different movie starring the same actors. And then, very abruptly indeed, it all turns incredibly strange just before the end in an outrageously over-the-top scene where the entire plot is suddenly explained, so hastily that I suspect they were trying to get it over with before the audience had time to realise how little sense it made.

In technical terms, this is a top-notch DVD with an excellent-quality picture in proper widescreen, and a choice of subtitled Italian or English dubbing. Most of the music is by Ennio Morricone, but his heart clearly wasn't in it, because if I hadn't noticed his name in the opening credits I'd have assumed some hack was trying to copy his style, but not trying very hard or very well. However, I did enjoy the cameo by Jürgen Drews, an obscure German singer who for literally no reason at all pops up in Prague in the middle of the night and belts out a hilariously bad protest song about butterflies and blood. It reminded me irresistibly of the ballad LSD sings in "The Producers" about a flower that gets flushed down the toilet. My guess is that the Italian director didn't know how absurd the English lyrics were. Why haven't any cool young bands covered this song ironically yet?

I don’t know why I find it comforting that there are many giallo films, especially from the early 1970’s, but I do. Those I have seen are consistently well made and well told, competently acted (compromised often by occasionally poor dubbing into English) and never less than interesting. They follow a similar pattern – often there is a black-gloved/masked killer and several nubile young women in jeopardy. The male heroes often appear to compete with them in the beauty stakes. Here, the meticulously styled Gregory Moore (Jean Sorel) is the main man here, but he is upstaged regularly by the wonderful Barbara Bach as his girlfriend Mira (“You’re adorable,” he tells her at one stage, and I can only agree). She is particularly striking in her final scenes.

The main difference between this and others of its genre is when we first meet Moore, he appears to be dead. We return to his unblinking, unmoving body at various stages of the story as it is prepared at the mortuary – the shocker is that Moore still appears to think and to reason. Quite how this has come about and continues, is a mystery throughout; luckily for us all, the film is mainly told in flashback, and it deals with the lead-up to Moore’s apparent incarceration and the disappearance of Mira.

Giallos are often leisurely paced, at least initially, and this is certainly no exception – in fact there are no glimpses of any answers for a lot of the running time, which often makes the viewing annoyingly opaque.

When they come, the revelations are particularly harrowing and exciting, and things race to a head in a wincingly powerful way. And then, at this peak, the end credits scroll down; it is over. It is a frustratingly sharp finale, but expertly handled, the finale brings things to an end in a way you may not forget in a hurry.