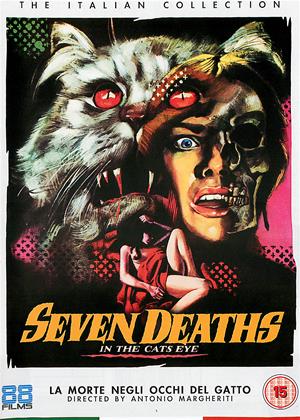 Rent other films like Seven Deaths in the Cat's Eye

Reviews (2) of Seven Deaths in the Cat's Eye

I don't quite know what to make of this incredibly odd movie! It looks to me as though its director, who is better known for much nastier horror films such as "Cannibal Apocalypse", was trying to spoof all those Old Dark House movies, but, not having much experience with or understanding of comedy, forgot to include any actual jokes.

The most baffling thing about this film is that the plot concerns the rich and supposedly cursed Clan MacGrieff. If your main cast are from every part of Europe except Britain, your extras are all conspicuously dark-skinned Mediterraneans, your locations are about as Scottish-looking as the surface of Mars, and the only distinctly Scottish element in the entire story is the family's name, why not just make them Italians, instead of desperately trying to pretend that all these people and places are Scottish? They couldn't even get hold of the right kind of bagpipes! This inevitably means that the dubbing is even worse than usual, thanks to the awful "Scottish" accents. Though if you're one of those people who can't bear badly-dubbed movies, you do have the option of viewing it in Italian with subtitles.

The extremely French and extremely naughty 26-year-old Jane Birkin is cast as a virginal Scottish schoolgirl, which suggests that we may not be intended to take any of this seriously. Oh, and for no reason at all, the Laird of Castle MacGrieff has a pet gorilla. Mind you, he also has a flock of fruit-bats in his cellar, so presumably this is a part of Scotland where the wildlife is as atypical as the architecture. But this has very little to do with the main thing we're here to see: seven people getting killed, just like it says in the title. While being watched by a cat. This is the second most baffling thing about the film. The presence of the cat whenever anyone dies has nothing to do with anything, and at no point is it implied that it might have. What it does mean is that a completely irrelevant animal gets so much screen-time that this is very nearly a horror movie starring Bagpuss.

This is a terrible film that deserves half as many stars as I gave it, but I kind of enjoyed it, in a perverse so-bad-it's-good way. It probably helps that I live in Scotland. It's too gory and not funny enough to be a comedy, too absurd to be horrific unless you're automatically horrified by a bit of blood (or a really bad Scottish accent), and if you like murder mysteries, this one won't challenge your powers of deduction all that much, since it follows the tired old trope of flagging everyone as the murderer except the actual murderer, but what with one thing and another, notably Jane Birkin running around in a transparent nightie pretending to be shy, eighteen years old, Scottish, and an actress, and of course that man-in-an-obvious-gorilla-suit gorilla, it's oddly endearing. It certainly opened my eyes to the ghastly truth about Bagpuss.

Convincing an audience that a cuddly, furry ginger cat is any kind of arbiter of doom was never going to be easy, but ‘Seven Deaths’ makes a good, er, stab at it.

Jane Birkin plays Corringa, who we first see returning to her family home: a splendid, gothic castle in the highlands of Scotland. Here, she is reunited with her neurotic mother, salacious uncle, and petulant cousin. And a wandering orangutan.

Serge Gainsberg, 41, and Birkin, 23 collaborated in 1969 on the controversial hit single ‘Je t'aime... moi non plus’ (originally written for and sung with Brigitte Bardot). Here, Serge briefly plays the Police Inspector; it is strange to see him dubbed with a think Scottish accent. For an Italian film set in a small Scottish village, however, results could have been far less convincing. This leads me to continue my belief that as a genre, giallo films are consistently well made. Having said that, this is somewhat less satisfying than others I have seen.

The ape seems merely a reference to Edgar Allen Poe, as is the idea of a cat somehow orchestrating/influencing dark events. Both animal-related concepts pretty much disappear some way into the story anyway.

The ending is also reliant on the unasked villain gloating and explaining the plot, and his part in it, which is something these kind of films don’t often feel the need to resort to.

Bizarre, unpredictable and downright silly at times (even for 70’s horror standards), Seven Dead in the Cat's Eye is an Italian gothic tale of mystery and terror that fits a horror formula well, but it’s everything that a true horror flick isn’t (is there such a thing anyway?). Its gothic imagery and claustrophobic spaces that invoke a sense of dread and despair hasten the audience to feel exactly what director Antonio Margheriti wants them to: no more or no less. On the other hand, the exaggerated soundtrack and abrupt change of camera angles do not deepen the mystery further, and provide for a clumsy storytelling worthy of ultimate cult status.

Seven Dead in the Cat's Eye follows a young lady named Corringa that goes to visit some of her relatives in an eerily looking castle basically in the middle of nowhere. Upon arriving, even her coachman takes his precautions by a quick prayer against evil spirits that goes unnoticed by our heroine in mind. What ensues afterwards is a series of murders that have one thing in common: they were all witnessed by a cat. Since the cat doesn’t hold the mental capacity of giving a speech, the mystery deepens even further and is up to Corringa to solve what happened, who did it and under which motives the murders were carried out.

The flick is all style and some substance, but the story comes off as convoluted and not-well thought-out to be even remotely believable (despite some paranormal action going on in the castle). Occasional ‘bursts’ of nudity add nothing to the plot and rely more on the shock factor to elicit emotional reactions from the viewer. And for a feature whose movie poster promises way more than it can deliver: the gore factor is toned down to fit a PG criterion (apart from some bloody razor action). There goes the shock value.

Traversing further down the rabbit hole of giallo proportions, and one witnesses how Corringa employs her wit to the best of her abilities, trying to uncover a family secret deeply buried beneath the tomb of the former masters. Or perhaps a psychotic madman is carrying out the murders in the namesake of old family curses? As Corringa, we too become perplexed and baffled.

To a large extent, Seven Dead in the Cat's Eye unravels like a big-budget theatrical play with set-pieces so meticulously crafted that puts modern gothic horror pieces to shame (if they weren’t bashed enough by both the audience and critics alike). One thing that personally left me confused was a certain creature that served no purpose to the story other than jump-scaring whoever it found uninvolved in the movie’s story till then.

As it stands, for the giallo genre aficionados - Seven Dead in the Cat's Eye is a potential fun piece to be had fun with.