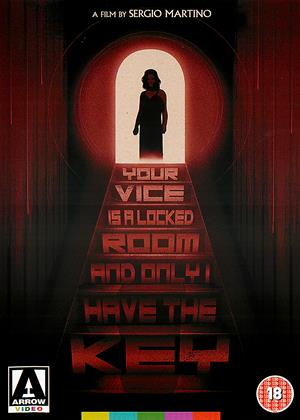 Spoilers follow ... - Your Vice Is a Locked Room and Only I Have the Key review by NP

As the debauchery becomes entwined with murder, the presence of a black cat becomes suspicious by its ubiquity. Acknowledged as inspiration in the opening credits, Edgar Allen Poe’s short story ‘The Black Cat’ has a lot to do with the lustrous feline, named Satan, looking wide-eyed but unconcerned amidst various gory and bloody scenes. After its pop-eyed demise, the resultant spectre of the creature seems to become a supernatural catalyst.

Amidst the passions of the ever-horny characters and the growing amount of murders, Oliviero remains unconcerned, which seems to indicate he may well be the culprit. And yet, his apparent guilt is plastered too thickly for him not to be a red herring. Or so you might think.

As much a dark and occasionally grisly whodunit as a horror, Poe’s influence becomes more effective and apparent towards the finale. As ever, the scenery is breath-taking (when not bathed in darkness) and Sergio Martino’s direction takes full and impressive advantage of this. Bruno Nicolai’s score joins the ranks of must-have available soundtracks.