Rent The Night Evelyn Came Out of the Grave (1971) 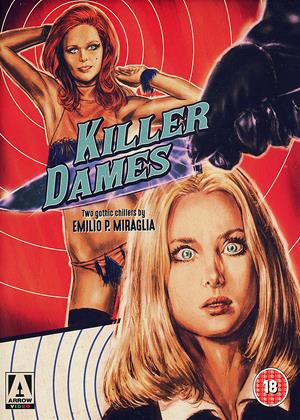 Reviews (1) of The Night Evelyn Came Out of the Grave

SPOILERS follow ... - The Night Evelyn Came Out of the Grave review by NP

Adding to the incredible amount of horror films released during the first few years of the 1970’s, this giallo features Anthony Steffen as Lord Alan Cunningham, who spends the early part of this looking distraught whilst sporting the most magnificent clothes (my genuine favourite is velvety suede burgundy suit). The death of his wife Evelyn had lead to a breakdown for the Lord, and subsequent incarceration at a mental institution. Now the aristocrat is intent on luring other eager young red-heads to his expansive, crumbling mansion (his chat-up method includes grabbing them by the hair to check whether or not they are wearing a wig) for his own fetishistic games, often including the wearing of exotic thigh-length leather boots.

It’s all a little ponderous for the most part. One girl follows the pattern of seduction and murder, and then the plot moves onto exactly the same scenario for the next. Only when he marries Gladys (Marina Malfatti) do things become less repetitive. Cunningham’s homes and grounds (the film is set in England) is a jaw-dropping location. Alan fears his mental problems may be returning when he begins to see visions of his dead wife. His cousin Farley (Umberto Raho) reveals Alan was convinced Evelyn had a lover prior to her death.

As Alan once again deteriorates, deaths begin to occur (including a briefly gory incident featuring foxes nibbling on various innards)

This is a solid, a rather than spectacular, giallo film with lots of well-constructed twists (especially the final one). Occasionally, the villainy verges on pantomime levels of subtlety.