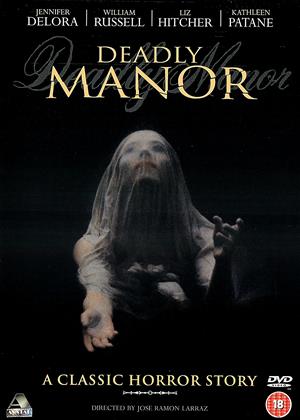 A group of teens … well, that’s a less than promising start. Vest-sporting, gum-chewing and riddled with hormones and attitude, I find such characters far more terrifying and off-putting than any demonic forces they will probably bluster into. This bunch are just exactly that – impossible to like and pure fodder for ‘whatever is out there’, hopefully to be despatched in the foulest way possible, and yet this cast lack the confidence and assuredness to keep their characters from attaining the true heights of swaggering numb-skullery of other ‘teen’ ciphers. To coax me out of this uncharitable view is the fact that this is directed and co-written by José Ramón Larraz, the man behind 1972’s legendary ‘Vampyres’.

The one character who emerges from the melee of manicure and highlighted hair is a comedy stout fellow Peter (Jerry Kernion) who quotes scenes from famous horror films much to the amusement of his cohorts. “At least it’s dry,” says one hunk as they enter an abandoned building in which they feel compelled to shelter from the storm. “I hear coffins are dry too,” he replies. When it eventually happens, his demise is the goriest and most effective of them all.

Unusually for Jarraz (this was his last horror), there is little sex or gore. When such scenes do come around, however, they are powerfully staged. Two of the group are having sex, and the beautiful young woman featured in many unnerving photographs hung on the walls appears to be watching them. Interspersed with other photographs, this time of corpses and disfigurement, the scene is one of quiet, effective horror.

Hitch-hiker Jack – a dreadful Clark Tufts – looks like he may be responsible for the deaths, when they eventually happen. In an arena where most performances are static, his awfulness excels.

This is not unenjoyable if you don’t take it too seriously. It is impenetrably under-lit during some key scenes, and is sprinkled with moments of spectacle, but is too slow for its flashes of inspiration (the climactic crumbling wall spewing out corpses for example) to raise it from clichéd, horror melodrama. Jarraz’s penchant for doomy atmospherics only occasionally materialises and the resulting whole makes it seem as if the slasher genre – already dying in 1990 – perhaps wasn’t really where his heart lay.