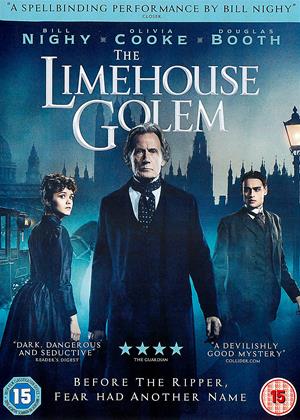 Reviews (10) of The Limehouse Golem

This is a sumptuous, beautifully produced period horror drama. It reminds me of the kind of carefully crafted historical chillers the BBC sometimes produces for the autumn audience, the like of which receives acceptable ratings against the talent show dross elsewhere on mainstream television, and receives complaints from the cavilling general public for being ‘too dark’.

Dan Leno (Douglas Booth), a kind of Victorian Russell Brand, takes an avuncular interest in young Elizabeth Cree (Olivia Cooke), who is under suspicion for murdering her husband. Inspector John Kildare (Bill Nighy in a role originally taken by the late Alan Rickman) has evidence that her husband may be the legendry murderer ‘the Limehouse Golem’, and is determined to save Elizabeth from a date with the gallows.

There are those who say Bill Nighy only ever plays himself. I think there is truth to this, but when you have cornered the market so brilliantly, why step outside of it? Here, he is exceptional as always as the Inspector, with much support from the excellent Daniel Mays as Constable George Flood. In a small role Damien Thomas (Count Karnstein in Hammer’s 1971 ‘Twins of Evil’) plays heavily bearded Soloman Veil. Maria Valverde is wonderful as the arch Aveline Ortega.

13 out of 15 members found this review helpful.

After reading the reviews from others I was reasonably looking forward to seeing it with my partner and father. All of us found this film muddled with storylines darting off here and there but not really contributing much to the main story.

Also timelines went back and forth which I don't have a problem with normally however with the other muddled stories going on we found this added to the confusion of the film.

What a waste of good sets, period costumes, and Bill Nighy. It could have been so much better but I felt it tried to be too clever.

Although my father is elderly ... he still has a sharpish mind and commented that the film was "A waste of time. I had to agree.

Loved this film, cliff hanger to the end! cast were super and the story riveting. Well worth watching, might want to see it again sometime!

Great gothic drama, not a horror - The Limehouse Golem review by Champ

I don't like horror, so was pleased that this didn't turn out to be one. I did watch a couple of bits through my fingers, but that's more about me being a wuss than any real gore in the movie.

And what an enjoyable movie! The performances were all great - Bill Nighy was his usual reliably brilliant self, but new to me were Douglas Booth and Olivia Cook, who were just as good. The plot genuinely kept me guessing, as a good whodunnit should.

Golem, go get em.... - The Limehouse Golem review by porky

Picture the Johnny Depp Movie 'FROM HELL' only ,thankfully, this time without that dreadful over acting of Depp himself .... a Much ,much better movie by far .

I didn't see one big clay Golem in this film, it was set in Limehouse though... - The Limehouse Golem review by DS

The Limehouse Golem is called a horror film due to a few extreme gory and graphic murder scenes but all told it is a Sherlock Holmes-style murder mystery where the viewer is expected to figure out who the killer is whilst being led up the garden path by misleading reconstructions of the murders. It’s none the worse for this.

Victorian London is a place that regular viewers of TV dramas and cinema is now getting used to and the squalid underbelly her is shown to good effect, although everyone, once again, is probably a bit healthier and more bonny than what would be the real thing, but it is a drama, a film, entertainment, so this has to pass. Including, as the novel does, real Victorian characters, Dan Leno, Karl Marx and George Gissing, once again for clarity the timelines of these real people don’t tie up particularly the real Marx and Leno but this doesn’t distract from an interesting twist in the usual type of Victorian murder mystery.

Oliva Cooke plays the role of Lizzie Cree almost to perfection and certainly, there is not a trace of the irritating vocal-fry the distracted so much in the TV production of Vanity Fair, her story is sordid, sad, vicious and interesting. Ably supported by the somewhat somnambulistic and unemotive Bill Nighy and the ever-stalwart Daniel Mays who could play his type of role in his sleep the film is in experienced and good hands. I couldn’t decide if Nighy was playing his character in this style or if he was picking up a cheque. To be fair to him it does work. Douglas Booth gives a strong performance as the Victorian superstar Dan Leno and the whole parts of the film involving the music-halls are lovely recreated, add into mix creepy Eddie Marsan and Maria Valverde and you do have a melodramatic grand Guignol murder mystery. It’s always a matter of opinion but I think the film was created on the slightly over-the-top camp side to fit in the setting and story if it was it works.

Overall The Limehouse Golem is a slice of horrific melodrama populated with good actors playing mysterious characters all apparently hiding their true selves from the world as the real Victorians did. The dark alleyways, murders and music-halls are all ticked off in competent style, the murders mysterious and gory and suspects many. If you looking for straightforward entertainment with a dark side this could be the film for you.

Interestingly depending on your experience you make take a guess at the killer and get it right at various points throughout the film. It took me just over halfway through the film for the coin to drop, others I have read online took less time and still others longer or not at all.

I would recommend The Limehouse Golem if you like your murky, gory, Victorian murder mysteries but if you are a bit blase about the genre and are looking for a realistic representation of that period be warned you might get a bit peeved.

This film annoyed me massively. From the start, it has a pc feminist agenda - incl the predictable child abuse back story (though the idea working men would stand by and let a small child get raped is wrong, and I doubt they'd be working alongside a black man either back then), hinted-at FGM with a hot iron, mucho abuse by nasty men (typical of drama and movies in this metoo mob age), loads of innocent fluffy women, and a 'strong' survivor woman taking centre stage.

OK so it's based on a Peter Ackroyd novel DAN LENO AND THE LIMEHOUSE GOLEM and we have to remember that this author is gay, Jewish and NOT a novelist really, being expert at non-fiction about London. And it shows.

I loved the actor playing Dan Leno; I thought the leading female failed to convince though. AND for me the twist was predictable, and also unbelievable. To murder someone and dismember them requires the strength of a strong man! That's all I'm saying. Pc reversed roles do not work - just as casting women as snipers and in roles which are 90% men (as in The Bodyguard) is dishonest and fails to convince.

My favourite part of this film - the Music Hall context - and Eddie Ramsden as the UNCLE character was great - until the YAWNSOME predictable 'men are all abusers' trope kicks in.

A film that could have been good but which annoys greatly and grates. 'Political correctness' and gender quotas do not a great movie make. Be warned - much more of this sort of stuff on its way from femi-Hollywood. We all lose as a result.

Not the sort of film is usually watch, horrors aren't my sort of thing, but the impressive cast got me intrigued. Really gripping many twists. Don't usually comment on sets and design, but these were very realistic and helped pull you into the story. Not for the faint hearted though.

To be fair, not as good as Depp's 2001 From Hell, but goes well. Bill shows can do it fairly straight if given the chance.