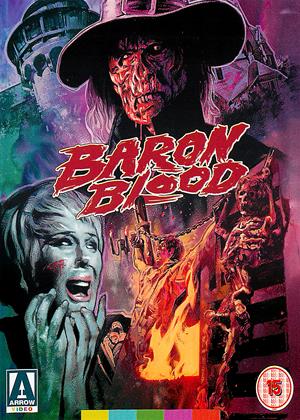 Mario Bava is undoubtedly a huge and influential name in cinema. He has directed some inspirational movies over the years and even now, almost forty years after his death, his legacy is held in high esteem. So I realise I’m walking on thin ice by admitting that, on the whole, the genius of his work completely passes me by. I haven’t seen all his films, but of those I have seen, only 1963’s ‘Black Sabbath’ has really bowled me over. Other projects, like this one I’m sorry to say, make little to no impression.

Known very much for the visual flair he injects into his low budget films, he ensures many scenes here are generously lit. That is to say, there is much beautiful imagery on account of the many colours that spring from various areas and shadows. Lit up like a Christmas tree, you might say. And that is one of the issues I have with his direction – gaudy and striking these scenes may be, but any sense of realism comes a very distant second. Characters are swathed in psychedelic mists, every contour on their faces illuminated like traffic lights. This approach reduces everything to a stage set, with no sense of atmosphere, even when filmed in a real location. A ‘heightened’ reality then, and something you cannot really believe in.

This approach stretches to the performances too. There’s a kind of subtle ‘knowing’ quality to the characters – again, like they aren’t quite real. They don’t react as a real person would react. And when the horror they are reacting *to* is also similarly stylised, I feel as if we are watching a fairy-tale, or a comic-strip. This approach works when a story I somewhat fantastical in and of itself (again, ‘Black Sabbath’ is a prime example), but it does not flatter what is intended to be a frightening, gothic thriller like this.

As a result, we get moments of jeopardy and gory scenes but no sense of tension or drama. Things happen in a colourful way, and then there is some talking before other events happen in a similarly cartoon-like manner.

I’m sounding less impressed with ‘Baron Blood’ (even the title sounds like a children’s story) than I actually am, but these are the issues I find not only with much of Bava’s work, but also some of those who have been influenced by him (Dario Argenta, Roger Corman and many of Tim Burton’s recent projects) and, while some scenes are genuinely breath-taking, they are never remotely real, and despite some flashy camera effects and a committed performance from star Elke Sommer (and terrifically spooky Gretchen played by prolific 8 year old Nicoletta Elmi), this film is doesn’t massively excite me. My score is 5 out of 10.