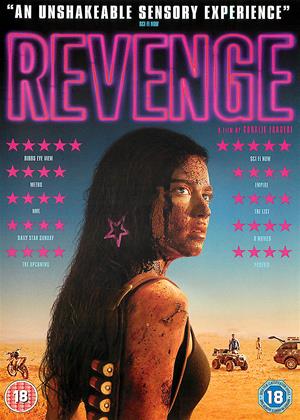 The story and plot are so basic and predictable, it's barely worth mentioning. The story is about the birth of a Mexican Tomb-Raider with murderous revenge in her blood. What it lacks in story and sharp dialogue it makes up for, with the actors, decent directing and cinematography. Matilda Lutz was absolutely brilliant to watch, although obviously there are some uncomfortable scenes, but nothing too nauseatingly graphic for horror standards. Put it this way, I dozed off 10 minutes into the Tomb Raider reboot, but this just about kept me going, and there was a satisfying ending. Major gripe though is the lack of dialogue, so many unanswered questions. Would have been better if Lutz found someone, even if just a Wilson football she could chat with. Also, there was any shock twist or anything unexpected that happened, so that's why it's hard to offer more than three stars.

Although vastly over-rated by critics, Revenge is nevertheless worth a look once you get past the film’s distasteful first half-hour. In a desert house, Matilda Lutz wears skimpy clothes and teases three men until she gets raped and left for dead. That’s no spoiler because the film’s title and trailer tell us as much, so that’s half an hour wasted.

The remainder of the movie (the revenge part) is totally unbelievable, but it’s so well paced and shot that it’s one of those ‘so bad it’s good’ films that, late night after a few pints, could easily become cult viewing. It’s impossible to care about any of the characters, but it races along to a pulsating soundtrack with scenes so gory it almost verges into horror. Best thing about it? The lovingly photographed Moroccan desert, where all the action take place.

Gave up - Revenge review by rh

Nothing wrong with predictable plot. But all the stupid camera shots of people staring at each other, eating chocolate, bleeding and panting made this a bore. I wanted to shout "just get on with it!" Started fast forwarding then gave up.

A woeful film about the mistreatment of a lady visitor to a lad retreat in the desert and who did not realise she was there to entertain.  It goes wrong and a blood bath follows as she gets her own back.

I Spit on your Revenge - Revenge review by porky

Very much in the 'I Spit On Your Grave ' revenge movie genre .This is a very good version, I would say Far Better than the 'I Spit' Remakes.

Interesting mix of French and English language throughout .

Well worth more than one viewing .possibly my Favourite Revenge Movie .

It's a film that contains a lot of blood, internal organs, horrific injuries shown in great detail, knife wounds in close up, and all done with such careful photography the producers must be congratulated on the shock and realism of this aspect of the film.

Unfortunately they must have been so busy planning the almost non-stop gory bits they forgot to add anything else to make it into a story and a worthwhile film. No character depth, no development, no twists of the plot (plot - ha!). It's a non-film, just lots of gore. Girl gets raped, they hunt for her as she hunts for them, lots of injuries in close up and ultimately death. That's about it.

The only plus side I can ascertain is that the photography is excellent, especially showing the Moroccan scenery.

There's people moaning on here, what are they moaning about? This was one pukka non stop action movie! Great acting and great story line! I thoroughly enjoyed it to be honest from start to finish, and that makes it a top movie, so a 5 stars and a thumbs up from me! I was really skeptical at first as I wasn't sure to take it out due to it having a few subtitles in it, i usually find them a right drag, having your eyes glued on the subtitles all day, but I was pleasantly surprised to be honest!

It is in English, in case you're wondering with a bit of french subtitles, if it was 100 % subtitles that would of have been utter shit! It has a lot of blood in it though, but hey it makes it all the more realistic! I loved it, top movie! 5 stars from me!! *****

A simple plot, and fairly predictable. It is pretty gory and hard to believe the characters would survive that but the camera shots are beautiful, and so are the last two standing. The types are handsome man, desperate coward and fat man, and beautiful girl turn Tombraider - or the Huntress.  I think the last scene went on for too long, but hey.

Is it worth getting? Well the beautiful people appear naked in it and the ugly people keep on their clothes.

It stars better than it ends and is so unbelievable as it morphs into somesort of gallic desert Wonder Woman shtick which is unintentionally hilarious at times.

I Iiked the unusual setting and close-ups of Nature etc. Plus the dreemy truppy bits.

Suspend your disbelief and enjoy the ride.