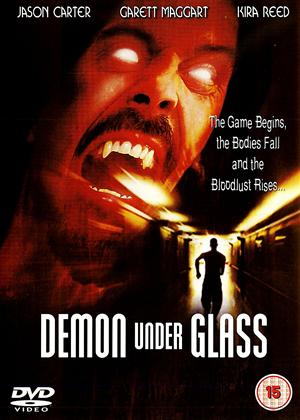 Unavailable
13 Hours in a Warehouse

Reviews (1) of Demon Under Glass

Doctor Hersch spearheads research into the capture and subsequent ‘understanding’ of ‘the vampire’ he has named Vlad (although his real name is revealed to be Simon Molinar), but he is killed during the creature’s capture and the project is assigned to his subordinate, Doctor Bassett. Bassett then enlists the help of the idealist Doctor Joe McKay who is entirely new to the project and becomes hazardously sympathetic to the prisoner.

During the lengthy experiments, the vampire seems compliant, even docile. Simon describes his vampirism as a curse of nature he has no control over; he reasons that his victims are from the less respectable avenues of society, and that is how he elects to justify his lifestyle. His captors cause countless deaths through their various experiments. So who is the true evil here?

Originally this film was called simply ‘Vampire’, about which little is known. It is under the title ‘Demon under Glass’ that it has proved more widely available. Even as a fan of low budget horror films, I found the first few scenes quite off-putting. The lighting and camera work is immediately blurry and the direction fails to capture all of the action onscreen. Whether I got used to this, or things improved once the story had settled into a sedate pace more befitting the nature of the unfolding story, I don’t know (probably a little of both). Happily, ‘Demon under Glass’ proves to be extremely enjoyable. The moral grey area between the ‘decent’ scientists (who are revealed as anything but) and the ‘evil’ vampire (who is mostly composed and honest about his condition) is exploited in a compelling script.

And yet the vampire is, understandably biding his time. When he learns that once the experiment is over, he will be destroyed, he clearly wishes to escape, which he does. The last we see of him is when he is gleefully picking up a prostitute in a night club, proving that despite being a victim of his own nature, he also clearly enjoys himself.

So were Molinar’s monologues while imprisoned truthful, or was he just stalling for time so that he could make his escape? Such conclusions are left open in this highly enjoyable film.