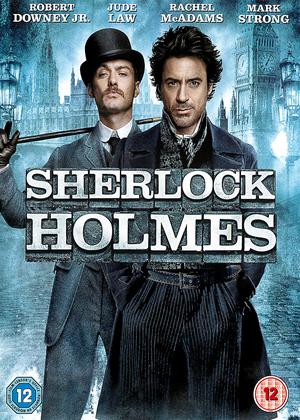 Guy Ritchie and co. provide us with a modern reboot of Sherlock Holmes in what is a surprising piece of work. Far from a classic it is arguably Guy’s best film to date and entertains, especially the first half of the film when the mystery is intriguing. The wheels do fall off as it becomes clear the director adopts a by-the-numbers approach to action sequences. The environments are too heavily stylised and the CGI very noticeable. The soundtrack is also misleading as you begin to feel that the movie is set in Dublin and not London; its out of place and should have been better. What maintains your interest is the central relationship between the main characters. Without this chemistry, Sherlock Holmes would just be another badly implemented revamp.

While Conan Doyle would recognise quite a few of the elements of the story (Irene Adler as Holmes' femme fatale, Watson as a gambler who needs his chequebook locked away, Holmes shooting VR into the wall of his rooms) I doubt whether he would be too pleased with the end result. So Holmes fanatics steer well clear. But anyone who enjoys a good thriller will enjoy this - well acted by Downey and particularly Law. But I think Holmes and Watson were ripped off by the hansom cab driver who took them from Baker Street to Pentonville nick by heading South across London Bridge. And the sewers of the Houses of Parliament must be extensive indeed if they emerge on the Thames by Tower Bridge.

I'm honestly not sure whether to be appalled or impressed.

Reasons for being appalled: It's a Guy Ritchie film, directed like 'Lock, Stock' or 'Snatch', full of words and action, but no real substance. Holmes is played by Robert Downey Jr who reprises his role in 'Iron Man' and plays Holmes in much the same vein as he played Tony Stark – brash, opinionated, wordy. The plot is simply ludicrous and mixes black magic, secret societies, world domination, ginger midgets and a radio controlled cyanide gas machine under the Houses of Parliament. Add to that a succession of American and Irish accents, bare knuckle boxing / karate and Irish music from 'The Dubliners'... Words fail me.

Reasons for being impressed: Suspend your disbelief and it becomes quite entertaining. The period London details work quite well, even the rather silly ending atop the half-constructed Tower Bridge. There's plenty of action and Holmes displays his renowned powers of deduction throughout. Dr Watson is played by Jude Law and this secondary role is quite well done.

I wasn't expecting much from this. The director is Guy Ritchie whose films - often cartoon-violent and mockney - bore me. However, I really enjoyed this - 4.5 stars. The plot and screenplay was well-paced and full of nice twists; acting and accents are spot-on; and it even made me laugh several times with one liners. Clever and watchable - though some of the violent explosion scenes were a bit too Hollywood action movie for my tastes. I loved the location of the finale too. SOME silly language errors: Sherlock Holmes would not use modern phrases as he does sometimes here. But still, all in all a good ride and WAY better than the rather irritating new text-speak TV series. I can actually believe in these two actors as Holmes and Watson (and the latter is given an interesting backstory which adds to the story and is not just tacked on). 4.5 stars.

A very entertaining film that exceeded my expectations. Downey Junior was very charming and Jude Law was surprisingly effective as Doctor Watson. A fun film to enjoy when you are in the mood to relax and off.

The Matrix with Humour! - Sherlock Holmes review by CP Customer

I did not realise this was supposed to be a comedy, so enjoyed the humour even more with it coming as a suprise. Loved the special effects too and predictions of what might happen in the fight scenes. Thoroughly enjoyable.

I wasnt too sure about watching this film as it wasnt my kind of film. However, i am glad that i did. Great entertainment. Loved it and would highly recommend it!

Good all round entertainment - Sherlock Holmes review by CP Customer

Very enjoyable movie with good performances from Robert Downey Jr and Juse Law. Nothing too taxing on the brain. Well worth watching.