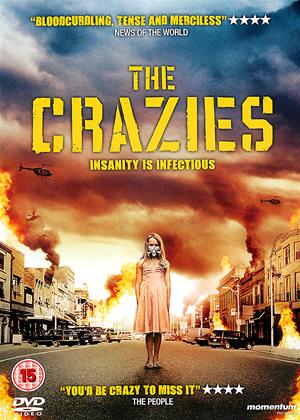 Synopsis:
Welcome to Ogden Marsh, Iowa: the friendliest place on earth. A picture perfect town where your neighbours are your friends and your friends are your neighbours.... Until they want to kill you. A mysterious toxin in the water supply turns everyone exposed to it into mindless killers and the authorities leave the uninfected to their certain doom in this terrifying reinvention of the George A. Romero horror classic. Sheriff David Dutten (Timothy Olyphant) and his pregnant wife Judy (Radha Mitchell), find themselves trapped in the once-idyllic town they can no longer recognise.
On the run from infected neighbours, loved ones and friends, targeted by the ruthless military and terrified of getting sick, they are forced to band together with other survivors in a desperate struggle for survival.
Actors:
Radha Mitchell, Timothy Olyphant, Danielle Panabaker, Joe Anderson, Christie Lynn Smith, Brett Rickaby, Preston Bailey, John Aylward, Joe Reegan, Glenn Morshower, Larry Cedar, Gregory Sporleder, Mike Hickman, Lisa K. Wyatt, Justin Welborn, Chet Grissom, Tahmus Rounds, Brett Wagner, Alex Van, Tony Winters
Directors:
Breck Eisner
Writers:
Scott Kosar, Ray Wright
Studio:
Momentum
Genres:
Action & Adventure, Horror

Reviews (6) of The Crazies

More of a suspense movie than actual horror.... - The Crazies review by CP Customer

I must say I was surprised by how much I enjoyed it. I've never seen George A. Romero's original made in the 70's, so I held no real expectations except for it to be another boring "horror" Hollywood remake. The storyline and plot actually did keep me interested enough to find out how the whole thing was going to play out. It was all a tad predictable however, most of the scare scenes were predictable, only once did one actually catch me off guard. But this movie, surprisingly enough, wasn't solely built on scares as much as one would think. It is more of a suspense thriller than a fright film, in my opinion.

My main gripes: The abysmal "horror soundtrack" used to accentuate what's supposed to be scary but really isn't all that scary. And the frequency of the "Hey, let's split up and get out of each other's sight" mentality the main characters had, then in the very next scene they are attached at the hip. Some more consistency and realistic characterisation would have been nice. But I guess that's par for the course with this genre. Without wanting to spoil the entire movie for everyone, you do find out very soon in to the movie the source of the "problem," but they still managed to keep it interesting after I got over that disappointment.

All in all, one of the better Hollywood remakes and definitely worth seeing.

It's not bad - just so predicable... - The Crazies review by RP

Apparently this is a remake of the 1973 film of the same name and directed by George Romero, who gets credited as Executive Producer. It suffers from what might be called 'the remake syndrome': it's simply not original. Mystery affliction send locals into a murderous rage. Sounds familiar? Sounds like '28 Days Later'? Sounds similar to other zombie-type films? You're right – it does sound familiar and it is, although these aren't zombies. This time the affliction / infection comes from a biological weapon and there is a bungled military attempt to contain the outbreak. Only the two lead characters escape (of course), everyone else perishes (of course), and there is (of course) the inevitable hook at the end which leaves room for a sequel (of course). It's not a horror film, it's not a scary movie, it has few if any shocks or surprises and it's all very predicable. Of it's type it's not bad, just very average, and I've seen a lot worse – so I'll give it 3/5 stars.

Ok i'm eclectic with music and film i like most genres this film has it all conspiracy, loyalty, sharp shooting a little dry humour and lots of blood guts n gore, if you like the above then give it a whizz i'm sure you'll enjoy it................

Not great!! - The Crazies review by CP Customer

Was dissapointed with this film, it was a potentially good story line but was not particulary and scarey and dragged on a bit, usually like horror/zombie films but this wasn't great!

the crazies is a great modern take , something that could happen which makes it so realistic, has links to 28 days later, and is tense like the current tv series the walking dead on sky1, this genre had to come up with something new and refreshing from the remakes of george a romeros classics in the 70s and 80s , to recently in 2000 with rob zombies remakes, this defiantly worth watching.

I knew I should have used bottled water! - The Crazies review by CP Customer

It was Ok. Basic plot (contaminated water supply)and an ending you could guess. The hero (Sherrif Dutten) and his wife survive several close shaves and you just know they will despite everyone wanting to kill them. Nevertheless I have watched worse.