Eugenie: The Story of Her Journey Into Perversion (1970) 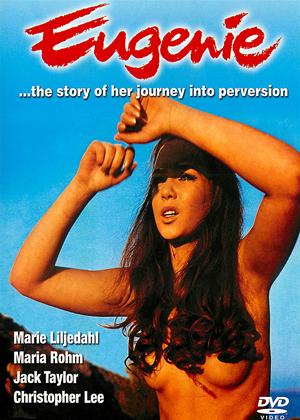 Rent other films like Eugenie: The Story of Her Journey Into Perversion

Reviews (2) of Eugenie: The Story of Her Journey Into Perversion

Don't waste yout time.. - Eugenie: The Story of Her Journey Into Perversion review by CP Customer

The story by Marquis de Sade mey be good, but not this movie. It may have been more interesting in the early 70's, but naked skin these days? The interviews are OK, but else...no. Time can be spent much better than watching this.

Spoilers follow ... - Eugenie: The Story of Her Journey Into Perversion review by NP

‘Eugenie’ is also known as ‘Marquis de Sade's 'Philosophy in the Boudoir’' and ‘De Sade 70’. Based on the perversion of de Marquis de Sade, directed by Jess Franco and guest starring Christopher Lee, ‘Eugenie’ has to be a horror film. Doesn’t it?

Few were more surprised at the film’s content than Lee himself, who had agreed to record a number of brief scenes as Dolmance, ostensibly a narrator of events. When viewing ‘Eugenie’, he found that scenes filmed after he had left the set were more explicit than he was lead to believe. Rather than being affronted, he seemed quite philosophical and even amused in subsequent interviews. Immaculate in a velvet smoking jacket (worn in his Sherlock Holmes outings), he wrings every last drop of enunciation from the words he is reading.

20 year-old star Marie Liljedahl (playing 15 year-old Eugenie) was uncomfortable filming some of the more extreme scenes, although this isn’t noticeable from her performance. Perfectly exuding a kind of naïve sensuality, of someone desperate to grow up but not sure how to, she is immersed slowly into a world of sex and cruelty and is convincing throughout (one of the most interpretative scenes involves her wandering, skimpily dressed, into a room full of danger – and a hanging corpse – whilst clutching a child’s doll for comfort). In fact, all the cast are exemplary – regulars Jack Taylor and Maria Rohm in particular, never seem to turn in less than impressive performances.

The film contains various horrific moments and eventually emerges as a true horror story - Eugenie’s plight is distasteful and awful indeed (we are treated once again to the dubbing of the sound of hollow wind over scenes of scorching sunlight to indicate – quite effectively – the remoteness of the location). Rather than being the cut-price skin-flick one might expect, this is actually very evocatively filmed by Franco, suggesting more time (and possibly budget) available than usual, to do justice to his ‘vision’. It looks sumptuous, possibly due to the involvement of Producer Harry Alan Towers, who by this time had skipped bail for charges involving operating a vice ring, but still pursued a long-running career in films.