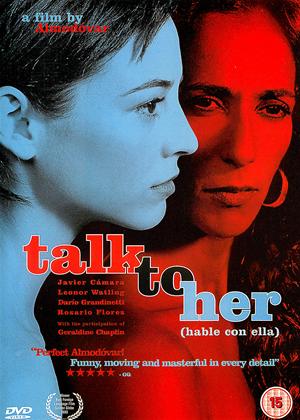 Dubious - Talk to Her review by DF

On release in 2002 this movie received many, in my opinion, overblown reviews. The sort of reviews that are applied to movies from the likes of directors such as Almodovar and Allen, reverential and full of critic-babble. Yes, it is a good movie with good acting performances and an intriguing, but rather disturbing story line. It does follow themes of friendship and loneliness, but hardly 'romance'. In this movie, Almodovar focusses on male leads and the female leads are reduced to passivity. the characters Marco and Benigno are shown as emotionally sensitive, but also carry complicated psychological baggage. Benigno is, to say the least, strange and ultimately his behaviour is reprehensible. Almodovar's excursions into clever wit are not so much comedy, but more comical; Almodovar is not good with irony and this is evident in the b&w movie sequence. (The hospital featured is a bizarre set-up and hopefully not normal in Spain!) As a director's movie, it depicts a very personalised, but dubious, insight in relationships and sexuality. Nevertheless, the movie is worth watching.

Mediocre - Talk to Her review by CP Customer

I found this film a bit boring. I felt that there was not a story line that hooked me into the film. It transcurred too slowly. I was quite dissapointed.