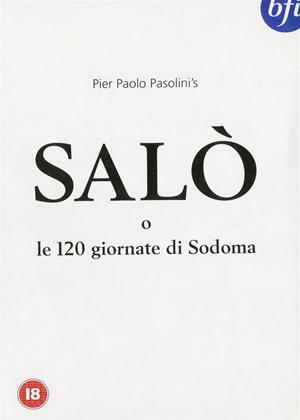 One can understand why censors in the 70's cut this film - not so much because of the sex and violence, but for the humiliating and degrading treatment of the characters. The teenage victims are even for today's standard treated harshly, whereas the sex and violence seem more tame than in recent films. Watch it in spite of the more unpleasent scenes as it is based on a classic tale by de Sade.

During World War II in Mussolini's republic of Salo four fascist libertine governors commit unspeakable depravities against a group of young captives. Pasolini's final film is a bleak allegory of fascism taken to the extreme of sexual degradation. Very hard to watch particularly the last scenes which depict a flagrant orgy of obscenity: a young boy has his tongue cut out, another has his eye gouged out and a woman is seen being scalped. Impossible to justify on any moral grounds, this is utterly repulsive viewing. However, as a work of art, it's impossible to ignore. The film is brilliantly constructed and shot as a series of bleakly formal rituals: there is no eroticism here the purpose is purely to evoke disgust for the fascist desire in the audience.

The film purports to be an adaptation of the 1785 novel, 'The 120 Days of Sodom', by the Marquis de Sade, with the story's setting being changed to the World War II era, i.e. to the dying days of the Fascist regime in Italy, the Republic of Salo (1943-1945). It is Pasolini's last film, released shortly after his murder (he was killed in mysterious circumstances on a beach near Rome in November 1975). I was curious to see it, as it has been surrounded by controversy since its release.

The movie is centred on 4 rich and corrupt middle-aged pro-Fascist libertines who have about 20 local teenagers (boys and girls) kidnapped and detained for 4 months in a mansion, under armed guard. (The 4 dignitaries of the Fascist regime have a retinue of thuggish armed guards.) Among the teenagers are the 4 men's own daughters, who are treated no better than the others.

You can look at the movie on different levels. First of all, as a film, it is reasonably well-made, but no more than that, in my view. (It has been hyped up in certain quarters.) It is pretentiously intellectual in some ways, since the 4 torturers have literary urges alongside their baser instincts. It is quite long (nearly 2 hrs): personally, I was relieved when it came to an end.

Second, as an adaptation of the novel by de Sade, it revels in the depiction of sexual depravity in all its forms (with special emphasis on anal concerns): I have not read the novel by de Sade, but suppose that the main themes would be found in it. (The word 'sadism' is derived from de Sade's very name...) Finding pleasure in inflicting pain on others is the central theme and activity in the movie. This can only appeal to someone with sadistic tendencies, since it is hardly an enlightening study of such sinister instincts that we can learn from, through watching the film.

Third, the movie can be seen as a condemnation of Fascism through the medium of the allegory: the sadism of the 4 Fascist grandees is what Fascism is about, the director seems to be saying. The problem is that this is, basically, the message: a very simple message that you can sum up in one sentence (Fascism is depraved). I do not object to the statement, but do we need 2 hours of graphic depravity in order to be told that this is indeed what Fascism is? In the course of the (pseudo-) demonstration, the film inevitably indulges in what it denounces, turning into a voyeuristic, pornographic spectacle.

In conclusion, the movie is an ordeal to watch. It is a pretentious, provocative film, built around a mixture of unappealing genres, which include pornography, gore and horror. After nearly 2 hours of it, you have not learnt very much. It is repugnant. Avoid it.

On a similar theme (but focused on Nazi Germany), 'The Damned', by L Visconti, on the other hand, is a masterpiece. This film isn't.

I watched this and it was very bizarre! I wouldn't say it was shocking, but there are some pretty minging things these young people have to do. It kept me watching and would give it maybe a 6 1/2 - 7 out of ten. It is subtitled, but that didn't bother me. It is mostly about making people eat poo I would say, but at the end people get tourtered, although u don't see the full extent you get the idea, you get to see toungue cut out, eye gauged out and a ladies scalp cut and peeled, hmmm. U will have to watch it to understand..