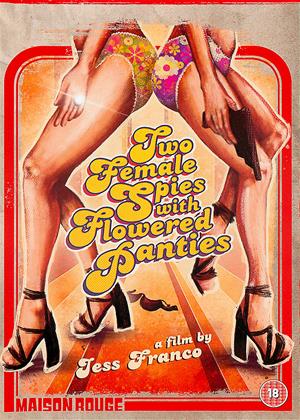 Prolific Spanish Director Jess Franco’s comedies are far from my favourite films: ‘Kiss Me Monster’, ‘Trip to Bangkok, Coffin Included’ and ‘Red Silk’, to name but three, I find progressively challenging to sit through. It could just be that the humour is lost in translation. Whatever the reason, I much prefer his ‘serious’, more personal, projects.

‘Two Female Spies’, which begins very much as a comedy, features hapless strippers Cecille and Brigitte (Lina Romay and Nadine Pascal) who are released from prison in order to work undercover for the US Government. Pretty unbelievable, and presumably intended to be hilarious and farcical, their mission immediately takes on a far darker tone with the introduction of Adriana (Susan Hemingway), a very young-looking innocent who is hypnotised, kidnapped, tortured and in very protracted scenes, raped. That events continue to shift in tone in such a way throughout make this a truly unpredictable 96 minutes.

Always prolific, Franco may not have had the time to iron out a more consistent approach. Or, and this is not beyond the realms of possibility, the sudden lurching changes between silliness and horrifying cruelty might be entirely deliberate. In many ways, I like this discordance – you really don’t know what kind of story you are delving into. In other ways, it does make for a very choppy experience. And of course, following rape and torture with jollity and titillation is deeply distasteful – but then, this is Jess Franco, who always thrived on being provocative. Problem is, that approach comes at the expense of an involving story, and sadly, ‘Two Female Spies’ proves to be an ultimately dull experience.

The character of Milton (Mel Rodrigo) is most changed by the various different edits of this film (although other characters are deleted altogether). Introduced as an effeminate homosexual, he proves to be the hero of the piece, before renouncing his old sexual ways and vowing to marry Romay’s Cecille. The sight of Romay, dressed in very little but sandals and a shiny swimming cap, tottering over a rocky plain to a void a helicopter, is far from her greatest moment but once again proves that, whatever film she appeared in, she always entered into it whole-heartedly. Sadly her partner in this ‘romp’, Brigitte, succumbs to a fate which is probably the darkest moment this film has to offer. My score is 5 out of 10.