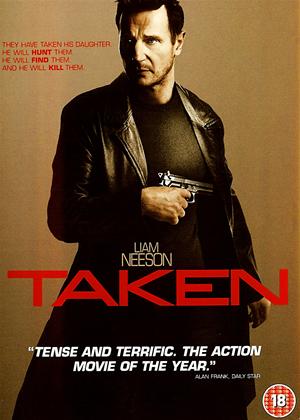 Synopsis:
Liam Neeson stars in this action-packed thriller that will have you on the edge of your seat from start to finish. When his daughter is kidnapped in Paris, a former spy (Neeson) sets out to find her at any cost. Relying on his special skills, he tracks down the ruthless gang that abducted her and launches a one-man war to bring them to justice and rescue his daughter
Actors:
Liam Neeson, Maggie Grace, Famke Janssen, Leland Orser, Jon Gries, David Warshofsky, Holly Valance, Katie Cassidy, Xander Berkeley, Olivier Rabourdin, Gérard Watkins, Marc Amyot, Arben Bajraktaraj, Radivoje Bukvic, Mathieu Busson
Directors:
Pierre Morel
Writers:
Luc Besson, Robert Mark Kamen
Studio:
20th Century Fox
Genres:
Action & Adventure, Thrillers

Excellent Film - Better than you could expect. - Taken review by CP Customer

These reviews do not do justice to a superb and intelligent thriller by a director whose time has now arrived (Pierre Morel).

This is a well crafted story. At 87 minutes it doesn't keep you longer than necessary. It is exciting yet at the same time intelligent. I highly recommend it.

This film has the speed and impact of the Jason Bourne films - if you liked them my guess is you'll like this too because the same kind of energy and cloak and dagger exists here and set around a x - 'preventer' whose daughter goes missing in Paris - grabbed by some Albanian underworld criminals. One for all the 15+ family.

The only thing i'll take issue with is Liams hair colour - grecian 2000 gome very wrong. Joking aside a very watchable enjoyable and can't take your eyes off the screen kind of film.

I have to disagree. This is nothing more than a poorly finished B-movie/video nasty with only the presence of Liam Neeson confusing matters. While he brings a real intense physicality to the role, the fact that he systematically butchers his way through the local ethnic population leaves a sour taste in the mouth. Despite the character's background, he shows no respect for life or the law and nothing will stop him rescuing his daughter from a terrible fate. The strong desire of a father to protect his offspring is understandable to us all, but not twisted to this extent. And if you do watch the film then just ask yourself, who is driving the boat?

More enjoyable than I was expecting - Taken review by CP Customer

So most of the other reviews are on the button. There is a lot of violence that seems un-necessary in order to extract the information but the time scale measured in hours sort of compliments the no-nonsense approach. There were also a couple of well thought out "told you so's" and there is no mistaking that Liam Neeson saved the film. Quite an eye opener on the shadowy world of human trafficking.

Overal much better than I thought it would be considering it was a filler on my list!

You will be - Taken review by CP Customer

If you liked 'Man on Fire' watch this! A similar story, but in my view this is far better. Neeson is brilliant, plenty of action with bits that made me think "This film is cool as...". The length of the film is ideal too, not too long. Would definitely watch it again.

I enjoyed this more than I expected, and found myself really on the edge of my seat at times. We can all pick faults with all the bits that aren't shown like, "What happened to the prostitute he rescued" "Why did he not keep his ex-wife informed about what was happening, and why didn't they come over as well" "What happened to his daughters friend and how about her family" "Do the corrupt french police get their comeuppence" "How come he doesn't get any come back over killing dozens of people". But we can make a list of similar things about every film.

I was riveted by the film, I thought Liam Neeson was great. Just don't watch it if you're a young female thinking of travelling abroad with your mates though!

This not meant to be great art or literature, its just good entertainment. It was competently scripted and by and large well acted. At 87 minutes it does not wear out its welcome and is a diverting way to spend an hour or two

This is a MUST watch film. Fantastic action. James Bond meets Jason Bourne. Great acting and one of my all time fav films.

If you like car chases, a high body count, and all-action heroes, then this is a film for you. It made me angry and despairing. Neeson's character is, as said above, a former special agent. When his estranged daughter wants to go to Paris for the summer with a friend, overprotective dad says "I'm not having her put at risk", However, Mum wins, the daughter goes, and needless to say is kidnapped almost straight away by an Albanian gang, who run a human trafficking operation. After a hundred or so deaths and chases, Neeson rescues his drugged-up daughter just as she's being given to an Arab Sheikh as a a special prize, a beautiful virgin. He brings her back to nice, safe America, which the film implies that she should never have left in the first place. Then he encourages her in her ambition to be a singer, by introducing her to a pop Diva that he happened to meet on a personal security job just before the shenanigans started. Estranged wife and new husband are very grateful to him, but it the reactions of the parents of the daughter's friend, the naughty blonde who is now presumed dead, are not recorded. However, she was obviously a bit of a troublemaker / slapper, so it doesn't matter. If you like all Albanians to be portrayed as crooks, and Arabs as corrupt, and girls as naive victims, and American males as superheroes, watch on. Otherwise, you may prefer to spend your credits on something else