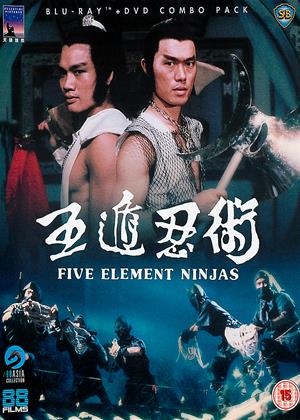 Five Element Ninjas is an 80’s chop masterpiece directed by Cheh Chang that probably 70’s kids still hold its VHS incarnation above all other Kung-Fu movies, in an apotheosis worthy of none other than those ancient Chinese pantheons that may or may not existed long time ago. As swords cut through flesh and bone, fake blood spurts all over (and around) the camera – proving that our masters wield magical powers to hit arteries even when they do not use sharp weapons at all. All things considered, Five Element Ninjas is a guilty pleasure for all old-school Eastern-chop initiates to indulge in.

The flick opens as two martial arts dojos clash forces in a battle extending well beyond anyone’s sense of time. A certain team however proves superior, and all defeated fighters, staying true to their hardcore tradition – draw their swords and slash themselves across their abdomens, in a zealous seppuku ceremony. As red blood spurts all around, the leader of the winning group throws his ring in a triumphant manner meaning ‘ye who contest us will experience the same destiny as those before them’. I.e. die a glorious death.

The story then proceeds in a similar fashion, showcasing a fight between the winners of the previous clash and the, wait for it: Five Element Ninjas. The band includes Gold, Wood, Water, Smoke and Earth ninjas. All of these possess almost supernatural-like abilities that prove too much for the previously triumphant group, which, needless to say – die a gory death.

Five Element Ninjas heavily reminisces later Japanese anime, where carefully crafted cinematography, vivid scenography and a special attention to lightning takes a large chunk of what makes those features great. Or was it vice versa? Whatever’s the case, Five Element Ninjas features some of the best choreographed fights one can ask for; masked interlopers jump in the air in stunts that defy gravity (way before Crouching Tiger came to be), all while using countless improvised weapons and trinkets to capture their opponents in spectacular, albeit silly at times, fashion. The flick is never boring, since exposition is kept to a minimum, and action never grinds to a halt.

Meanwhile, the antagonistic ninjas are not shy to use explosives, physical-law-defying spears and daggers that pop out of hats as it was an everyday occurrence among their enemies’ ranks. Keep an eye for Earth and Water ninjas: for even the slightest of sounds would prove detrimental to anyone’s well-being.

Five Element Ninjas is way ahead of its time. The special effects (cornfields set ablaze, underwater lurking) are nothing short of amazing, while choreography enters textbooks on how to make fight scenes happen natural and slick. At times, the music may feel outdated, but overall, it’s nothing that’ll break the movie-going charm.

Five Element Ninjas is a feature whose VHS…pardon – DVD is worth having.