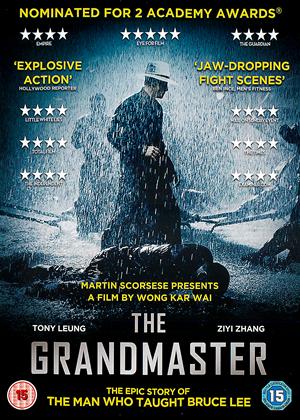 Reviews (4) of The Grandmaster

A beautifully written and filmed movie... the kung fu scenes are amazing and woven within the posturing and history lesson, is a heart melting love story.

This site's synopsis claims that this is an "epic action feature". Nothing could be further from the truth - I assume whoever wrote that only saw the trailer. Supposedly based on the life of a real person who taught Bruce Lee how to fight (a fact which becomes marginally relevant 3 minutes before the closing credits), the script cannot plausibly have our hero slaughtering CG hordes of thousands of flying fire-breathing warriors dressed as chrysanthemums, therefore what action there is tends to be plausible (well, almost).

In some ways this is a good thing. The fights are mostly one-on-one, and frequently civilized contests between true masters. The director referred to by this site as Kar Wai Wong, but almost everywhere else, including in this movie's credits, as Wong Kar Wai (in case you're wondering, yes, it's the same guy), really knows how to make a film look good, and this one is no exception. I've never seen another martial arts movie which so perfectly captures the inner tranquility of a kung fu master while simultaneously showing him (or her) sending opponents flying with irresistible force; you can nearly always tell who's going to win because the angry guy doing all the traditional kung fu shouting and pulling fearsome faces is inevitably about to be flattened by the quietly unruffled man who really knows what he's doing. And when I say that kung fu battles are sometimes accompanied by arias from Italian operas and this actually works, I'm not joking!

Unfortunately the movie is, to say the least, a bit light on action. Opening with a ferocious yet oddly irrelevant melee which looks suspiciously as though it may be in the film primarily to allow the creation of misleading trailers, it gradually becomes more and more sedate, focusing increasingly on the hero's domestic and economic problems, mainly caused by the Japanese invasion of China during the Second World War (of which we see very little, and in which he plays no active part), and his tragic not-quite love-affair with another character. This sort of thing occupies most of the running-time, and for large stretches, quite frankly, not a lot happens. Still, it's beautifully shot.

A similar film about a fictional character who spent a bit more time actually fighting for real, and a bit less wandering around being poor and having touching reunions with old friends over cups of tea, would be the kung fu masterpiece some people claim this is. Unfortunately, the balance between action and tenderly understated emotional scenes tips way too far in the latter direction, and some of the fights we do get to see are so irrelevant that they feel as though they were inserted to bring the action quota up to the bare minimum needed to market this as a martial arts movie.

So overall, when it's good, it's very, very good. But a lot of the time, you're waiting for the next bit where something actually happens.

This is a remarkably dull movie for people who don't like martial arts films, with mediocre overly stylised fight scenes, often filmed in the rain so the director can flip into slow mo raindrops which he seems to believe makes a film arty. The performances are flat, the storyline convoluted and episodic, without any real emotional arc or substance. Ip Man's legend was much better served by Donnie Yen in the Ip Man films, the third of which effortlessly displays an emotional depth that is beyond Wong Kar Wei's grasp here and which has stupendous fight scenes to boot.

Phenomenal - The Grandmaster review by EP

This film is amazing.

It begins with a really cool old school Kung Fu fight scene in the rain and just gets better and better. So classy.

The film then takes the viewer on a journey through 20th C events in China's history and there's even a love story there, so some of it goes a little slowly but it is all so beautiful to watch.

This film made me cheer, laugh and cry. I am a big fan of Kung Fu/Bruce Lee so it appeals to me possibly more than others but I really do feel this is a classic and unique piece of cinema. Wonderous!

Kar Wai Wong’s The Grandmaster is a martial arts picture that wants to get lost in its own beauty and emotion. It paces out the mesmerizing moments of action so the story can whiz by in the fast lane. You can do your best to track how it zips from decade to decade with interconnecting texts of expositions, but it’s far less engaging than the well-choreographed fights. Much in the same style of Crouching Tiger Hidden Dragon and House of Flying Daggers, it entrances the viewer with more fancy footwork and pretty words than flowing dialogue. It’s that rare breed of action film where you don’t mind the favoring of punches over plot.

Based on the life of the Wing Chun grandmaster, we follow Ip Man (Tony Chiu Wai Leung) from 1930 to 1950 in a changing China. Told in a non-linear fashion, the film jumps around in time where it becomes tricky to differentiate flashbacks from present events (maybe it’s all flashbacks for all I know). Take the first scene for example where Ip Man recalls a time when he was fighting waves of martial artists in the rainy streets. After some impressive moves and a victory over his attackers, he then reflects all the way back to when he was first inducted with his fighting style at the age of seven. Then he bumps up his memory to the point of his marriage to Cheung Wing-sing. Blink and you’ll miss most of these moments as it briskly zooms to the next fight scene as fast as Tony's punches.

The good news is that your eye is given plenty of time to react to the martial arts which is well-worth the time the film takes to slow down for these moments. The opening fight in the heavy rain makes great use of multiple camera angles and slow motion that allows you to take in the detail of every move. Ip Man, dressed in his dapper suit and fedora, flows through the bad guys with ease. He bends arms, sweeps legs and pushes with such force that men go flying backwards in gloriously exaggerated (but not over the top) stunt work. It’s a fantastic way to begin the film and perfectly sets the tone.

Unlike the simpler martial arts pictures, The Grandmaster favors poetry in motion as opposed to pulse-pounding blows. When Ip Man meets with the northern Wudang Boxing grandmaster, they have more of a philosophical debate as the northern master challenges him to the old snatch-this-from-my-hand test. Winning once again, the northern master’s daughter Gong Er (Ziyi Zhang) does not accept Ip Man's triumph. She challenges him to a test of defeating her in combat without breaking any piece of furniture within a lavish enclosure. The two trade fists and palms as they swing and sweep around the interior. Their battle takes them up the stairs, on the stairs and over the stairs as they fling each cross multiple floors. It’s a wondrous dance of martial arts amid some brilliant lighting and set decoration.

As the two part ways from their fight with Ip Man the winner, they undergo much heartbreak in an ever-changing world. With the Japanese invasion and threat of poverty, they lose loved ones and their will to continue on with martial arts. Ip Man loses his children and is forced to seek work in Hong Kong. Gong Er’s father is forsaken by his elders and she seeks vengeance by shirking marriage, children and teaching. The movie more or less becomes her’s for the third act as Gong Er fights her way back into the dignity of her house, eventually reuniting with Ip Man for a romance that simply did not have time to blossom. The two have an impressive on screen premise you almost feel cheated that nothing came of their relationship, but that’s just like a biopic for you.

The Grandmaster may bob and weave too wildly with its flashbacks and time periods, but it has the moves of a truly artistic martial arts epic. It takes a far more beautiful route towards relaying the unique life of Ip Man as a touching tribute to martial arts rather than a more character-driven period piece. It may sound like a cheap method, but it seems strangely fitting in how it wants to say so much more than just about the man himself. Where it falters in writing, it more than makes up for in the direction which gives a stylish drama coating to a commercial product. It’s a film where I didn’t mind so much about where the plot was at in the fights or callbacks. What’s up on the screen is an entertaining action picture oozing with beauty and elegance.