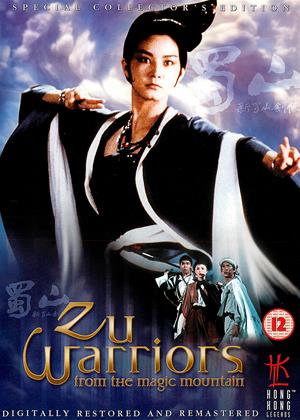 Rent other films like Zu: Warriors from the Magic Mountain

Sign up
Escape from the Planet of the Apes

Reviews (4) of Zu: Warriors from the Magic Mountain

It's ok, nice story, nice martial arts, maybe a classic a tale in their, moemnts of comedy and ascention of student to teacher, minor love story etc. I wouldn't watch it again, but certainly would appeal to some people out there, almost like a fairy tale story, magic and demons and flying through the air.

This barking mad martial arts movie, made in the gleeful anything-goes style of earlier neo-traditional oriental nonsense like "The Water Margin" and "Monkey" with a hint of early Terry Gilliam, comes close to being a true genre classic. What prevents it from quite achieving those heights is the chaotically cluttered and frequently incomprehensible plot, which I thought while watching it must have been the result of some immensely long and convoluted legendary narrative that really needed the runtime of the entire "Lord Of The Rings" trilogy to do it justice being squeezed into an hour and a half. Apparently not. It isn't based on anything, it's just one of those movies in which stuff happens until there's enough stuff to make a movie out of and then they let the audience figure it out.

Our hero is a soldier in one of those colourful wars where dozens of screaming men with huge pointy weapons somehow slaughter each other without any blood being shed (though in a neat bit of genre subversion, it turns out that many of the supposedly dead soldiers are faking it). He gets into some farcical bother which results in absolutely everybody attacking him including his own side, but thus far everything makes sense. Then, ten minutes into the story, he literally falls out of that plot into another one, and suddenly he's being attacked by flying mummies. And then it gets sillier.

It honestly feels as if the script was written by a roomful of small children taking turns to say what happens next. Bizarre characters wander into the story, deliver yet another dollop of increasingly baffling plot exposition, and are promptly forgotten about. Given a 49-day deadline to save the Universe, the heroes get sidetracked and forget all about it for a month, though to be fair, by the time they remember, the audience has forgotten about it too, having spent the previous hour trying to follow incomprehensible nonsense accompanied by action scenes that often look less like fights than a very energetic Surrealist ballet performed in zero gravity.

This is the kind of film where even the characters notice how wildly illogical their own storyline is and complain about it to no-one in particular. As well they might, seeing as they're in a movie where everything that happens is nuts, in a breathless non-stop fashion that gets a bit tiring to watch after a while. For example, there's a scene in which two people flirt awkwardly while chasing each other round a very large room mounted on hovering life-size stone sculptures of elephants. Which in most movies would get your attention, but by the time it happens in this one, something equally bonkers has happened every five minutes for the last hour and we just don't care any more, because our brains are still trying to process that guy who does kung fu with his eyebrows. Yes, really.

I don't think anyone could honestly call this a good film, because it's such a confusing mess that I think it must have been savagely cut down from a much longer version which has never been released. But as outlandish curiosities go it's enjoyable in a "Starcrash" sort of way. Though perhaps it should be watched more as a series of outlandish abstract images than a story which makes any kind of sense. It's also a wee bit careless about historical accuracy, unless of course the Chinese really did have bubblewrap in 500 AD.

As far as story and action goes, this is an interestingly wacky film. Its scenes and dialogues are very similar to other movies of the same genre from the same time period, so if you like martial arts movies from the 80's and don't mind a bit of craziness, you might very well enjoy this.

As for the restoration provided on this disc, it is superb. The video quality is leaps and bounds beyond what was present in previous releases, this certainly makes the movie a much better watch. All of the new extra features are great too.

Whilst the movie is not great, it can be entertaining and fans of the genre are likely to enjoy it.

A visual tour de force. The rapid-fire editing and wirework transfigure the actors into living puppets inside an amorphous, ever-shifting psychedelic landscape, rendering a wuxia fantasy film into something more closely resembling an experimental Norman McLaren short. Filled with audacious imagery, like the sparks literally flying from off the side of the screen as two characters develop an almost instant physical chemistry. The plot is nonsense, of course, but one doesn't watch something like this for the story - it's pure, glorious spectacle.