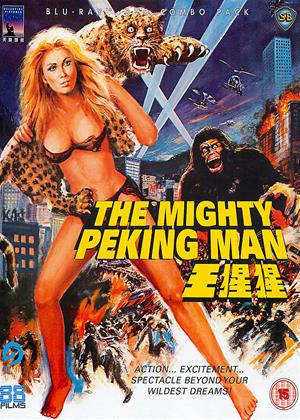 Reviews (1) of The Mighty Peking Man

If you're amused by that peculiar MST3K style of comedy where the obvious failings of terrible films are mocked by people who can't even fake being funny unless they've got an easy target to mercilessly bully, this should be just your cup of tea. Have some friends round so you can all laugh ironically while that guy who thinks he's a comedian (there's always one) shows how witty he is by pointing out the numerous aspects of this movie that aren't very good and saying "that's awesome, dude!" every few seconds. If you're stoned and/or drunk enough and you have a mental age of 13, it should be quite a party.

If, on the other hand, you're an adult who prefers movies to be good on in some way, however debatable, this is simply a bloody awful waste of celluloid. Whose brilliant idea was it to make a cheap rip-off of the dreadful and completely unnecessary 1976 remake of "King Kong"? Yes, Danny Lee is "iconic" because he was in some splendidly demented John Woo movies alongside Chow Yun Fat, but that doesn't make him a good actor, and he's got a lot less to work with here. The female Tarzan is played by some lady I don't recall seeing in anything else (though if I collected old girlie magazines I expect I'd recognize her), but I assume she was cast on the basis that she was the least worst actress they could find who a) looked good in a rawhide bikini, and b) was willing to happily prance about in slow motion with a fully-grown leopard balanced on her shoulders.

If I've just made this pile of rabid porcupine diarrhea sound interesting, my apologies. That's one of the very few moments so loopy it genuinely gets your attention. And by the way, the leopard looks a lot more relaxed than it does on the poster! Otherwise, it's painfully predictable (remember, this is Asian King Kong, so the plot is almost identical), and the special effects are so dire that the 1933 version looks like "Avatar" by comparison, especially the numerous scenes in which terrified extras pretend to be in the same movie as a poorly back-projected man in a very cheap gorilla suit.

Worst of all, it's boring. The rampages of Mighty Peking Man are almost entirely forgotten about during the bloated midsection in which our hero falls in love with Scantily Clad Jungle Girl in slow motion accompanied by awful early seventies music, and when we finally get to the apocalyptic climax where the monster stomps an unconvincing model of Hong Kong while being shot at by very obvious toy armored cars, it lumbers on for ages without being the slightest bit exciting in any way. I'm pretty sure this is the only film whose soundtrack includes both Dionne Warwick's "The Look Of Love" and the entire last movement of Dmitri Shostakovich's 10th Symphony, and if it was filled with schizoid details like that it would perhaps be a perverse kind of anti-classic, but unfortunately it's exactly what it appears to be at first glance: an exceptionally bad Asian monster movie ripping off an American film which was lousy in the first place, but looks pretty good compared to this.