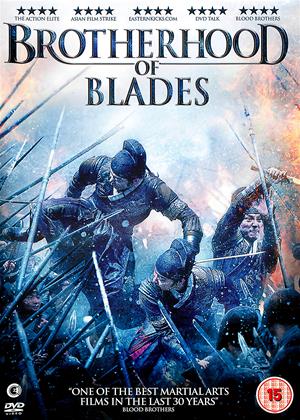 Reviews (1) of Brotherhood of Blades

The story is compelling and intriguing; it keeps you guessing and the characters are believable.

Brotherhood of Blades (Xiu chun dao) features a thrilling tale that intertwines corruption, betrayal, and all those classic admixtures that make a gangster film complete. Here, director [] goes for the other approach instead, i.e. to make Brotherhood of Blades Yang Lu a medieval, martial art, “flying daggers” type of film, in which he greatly succeeds, and in every way imaginably so. In fact, the story is delivered as equally as seamless via the vantage points of several actors; further, the story is also told through action as well, which most so-called “action” films forget to actually do nowadays and hence their action scenes become boring – in the least.

The film follows three brothers (elite officers) who are also posing as assassins overnight. Despite all of these doings, they are still worried by the lack of money, so naturally, when the opportunity arises to get rich quick, they jump straight into the fray without a second thought. As it turns out, there is a major conspiracy going on behind this work, as these three are about to plunge deeper into the world of betrayals, double-crossings, unexpected and thrilling plot-twists, and other things that make this movie a very enjoyable fast-paced experience full stop.

Each of these three brothers has their unique problem to worry about, and their actions spread truly over a span of both characters and events and directly influence the story as well. The ultimate point culminates in them having to battle against the film’s main villain, and this being “that type of movie” – this last fight is actually not fully realized – in all meaning of that word. Despite all of that, the three brothers are very much relatable to the average human (they have their own flaws, wants, needs, and desires), and very easy to cheer for because everyone else around them is either corrupt, incompetent, or both. Unfortunately however, this doesn’t always work as some plot points tend to stretch far too thin for far too long and therefore the movie drags for a bit.

The supporting characters are there for the taking, but they do little too less to make any kind of a meaningful impact. Others seem like they’re “smuggled” in the film just for the sake of introducing “bad guys” that, in actuality, make for bad opponents overall. However, this is the way these films have been done for a long time, so my guess is that the filmmakers didn’t want to deviate too much from this formula after all.

All things considered, Brotherhood of Blades is a very good action flick, a decent drama, a murky thriller, and something that most of “Wuxia” fans would most likely find themselves enjoying it.