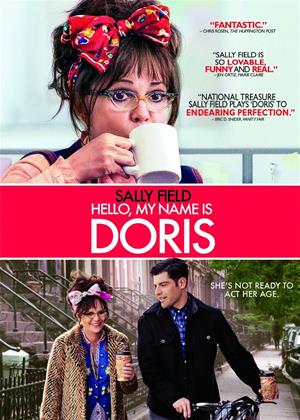 Synopsis:
After a lifetime of being overlooked and ignored, a woman of a certain age finds her world turned upside down by a handsome new co-worker and a self-help seminar that inspires her to take a chance on love in 'Hello, My Name is Doris', a witty and compassionate late-life coming-of-age-story. When Doris Miller (Sally Field) meets John Fremont (Max Greenfield), her company’s hip new art director, sparks fly - at least for Doris. Her first encounter with true romance (outside of the pages of a novel) convinces Doris that she and the mostly unaware John are meant for each other.
In the cluttered house she shared with her late mother, Doris mines the Internet for information on her one-and-only, guided by the 13-year-old granddaughter of her best pal Roz (Tyne Daly).
Actors:
Sally Field, Max Greenfield, Tyne Daly, Edmund Lupinski, Norma Michaels, Stephen Root, Wendi McLendon-Covey, Kumail Nanjiani, Rebecca Wisocky, Rich Sommer, Leilani Smith, Peter Gallagher, Susan Ziegler, Caroline Aaron, Elizabeth Reaser, Isabella Acres, Curran Connor, Natasha Lyonne, Michael Terra, Anna Akana
Directors:
Michael Showalter
Writers:
Laura Terruso, Michael Showalter
Genres:
Comedy, Drama, Romance

Rent other films like Hello, My Name Is Doris

Not released
Slightly Single in L.A.

Not released
When Do We Eat?

Reviews of Hello, My Name Is Doris

Some actresses age like a fine wine. A perfect example is Susan Sarandon, a beautiful and talented woman that never left the spotlight. But after seeing Sally Field as the lead of this off-beat comedy, I think she might be new favorite middle-aged actress. My wife and I both agreed that she doesn’t only look good for her age; she’s hot. I was very tempted to say she’s miscast in such a role that requires her to appear older and out of touch. There’s a scene in the picture when she takes off her makeup, undoes her hair and gazes in the mirror forlornly about how old she has become. This scene backfires in that Sally Field just looks more amazing in that scene more than any other.

So while Sally Field may not be as old looking for this type of role that requires her to be aged, she is so sweet and adorable in her shy demeanor and cute outfits. As the titular character, Field plays an old accountant at a company of young, hip turks. She finds herself daydreaming of having more in her life when a handsome young man is added to the staff. When not hiding her cubicle at work, trying not to blush around the new employee she fantasizes about (Max Greenfield), she lives in her hoarder house that was once occupied by her dead mother. Her only friends are a female conspiracy theory nut with her typical teen daughter. Her family, desperate to acquire their mother’s old home, snobbishly try to force Doris out of the house. It isn’t until she finally does some internet stalking to attract the attention of the man she fancies at work that she begins to find some joy and levity.

As much as I love Sally Field, I questioned if she had chosen a great script with such a premise. From the beginning scene where she sets up a fake social media profile to spy on her love interest, I had my doubts. I didn’t want to see a movie where poor Sally Field is laughed at for stumbling around in a world she doesn’t understand. Thankfully, this is a more sympathetic movie where Field stands out unironically as a lovable soul. In an attempt to get close with Greenfield, she hits up a concert of some indie rock group. Though she throws on some wild clothes for the event, she never lies about herself. When talking about herbal remedies with the hippy kids, she expresses how she fancies straight baking of banana bread to which the hipster kids dig as “out there.” When the lead singer asks what Doris thinks of his their music, she doesn’t hold back her honest opinions about the music being too loud and having too many bad words. She’s not mean or snobbish about it; just as nice as a little old lady can be.

Though there are some very strong roles from the likes of Stephen Root and Wendi McLendon-Covey, it’s Sally Field who carries this movie. She is given a handful of scenes that could have gone horribly wrong with an ill-fitting actress. A perfect example is a moment where Doris has a mental breakdown in front of her family trying to clean her house. A lesser actress would have made this scene goofy, but Field sells the drama with such passion and anxiety that I couldn’t imagine anyone else in this role. By this point, I was sold on the rest of the picture and didn’t mind the expected climax of the picture which leads to shouts and tears.

Hello, My Name is Doris has so much affectionate drama and sweet humor that it’s an irresistible movie. It narrowly avoided most of the cliches of the indie romantic comedies and the ones it does favor are at the very least amusing to watch for the fantastic cast. I normally don’t dig on independent movies that try so hard to push the quirkiness and cuteness, but this one got me. I mean, just look at Sally Field! Take off all that makeup, those weird dresses and that high hair and she’s still a fantastic actress you can’t take your eyes off of. She’s too good to be stuck in such a breezy picture that focuses on how old she is. Age is just a number for her as she still has some fight left in her.