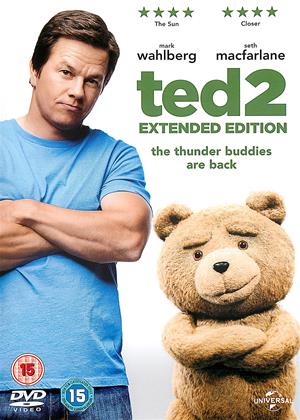 For the most part it is of course a re-hash of the first film in many ways, however if you are having your doubts about watching it, at least catch the opening wedding scene. My daughter and I couldn’t look at one-another for the rest of the evening without bursting into laughter. Silliness at its best.

I would never have expected a modern film to be so bursting with humour as this big nugget of an inventive motion picture. So original, very rude and a riot from start to finish. Ideal for repeat viewing. And uncut.

Read critic review sums it up ! - Ted 2 review by ee

As the critic said it should have been a cartoon it would have worked better, Very disappointing considering a very good effort on Seth's

part with a million ways to die in the west.

The worst thing about it was the glorifying of drug taking taken to new highs, oops well its true ,every other scene refers to how good taking drugs is , as most of the audience for this film must be of teenage age shame on you Seth..

who were the main backers for this film drug lords by any chance ,or were they smoking something when it was watched?

Best parts can be viewed in the trailer ,I have seen better and worse.

For me it just doesn't work , the first one was ok but to make another was pushing it. It doesn't work as a film , for me it's a bit cringey

The Ted sequel asks a question that seemed to never be fully answered from the first film: Is Ted an independent being that can be married and considered a parent? But it’s also about the very concept of making a movie like Ted 2. Is it a real story or just a smattering of Seth MacFarlane’s random jokes? Can it soar past its unfocused structure of being a gag machine to give some character to the foul-mouthed fuzzy wuzzy? Can the humor tear itself away from pop culture references and weed jokes for at least five minutes? But, more importantly, why did Ted 2 need to be made?

Ted 2 picks up where the last film left off with teddy bear Ted (voiced by Seth MacFarlane) entering into marriage with his girlfriend Tami-Lynn (Jessica Barth). His best buddy John (Mark Wahlberg) has now divorced his female love interest from the previous film, most likely because Mila Kunis made the smart move of not returning for this picture. As John struggles to find another woman, now on the opposite side of where he was in the previous film, Ted takes center stage in a rather dopey narrative about civil rights. He has to go to court to prove his rights as a citizen which eventually leads into the forced scenarios of a road trip, camping under the stars and causing mayhem at Comic Con in New York.

The plot really doesn’t matter at all considering it fits MacFarlane’s template for writing scripts. If it’s funny, throw it in the movie. It doesn’t matter if it doesn’t fit into the characters or the narrative. To hell with the narrative! Who needs it when you can fill up your running time with an endless supply of weed jokes, racial jokes and pop culture references. Notice how I didn’t write pop culture parodies. Parody would imply that there is something funny to be exploited from such material. Rather than find something clever, MacFarlane relies on his old standby of simply replicating what he’s seen in movies. This has always been a common complaint of MacFarlane’s style of comedy and I probably sound like a broken record at this point for still pointing it out. But it’s hard to just brush off such thoughtless nods to The Breakfast Club montage when there are YouTube videos by amateur filmmakers with better punchlines than “hey, remember The Breakfast Club?”.

There’s a reference to Planes, Trains and Automobiles in which Ted plays the role of John Candy recklessly driving at night while his buddy sleeps in the passenger seat. The only humor that seems to be implied from such a scene is that a teddy bear is reenacting a familiar movie scene. This is the template for the majority of the gags which either replicate movie scenes or simply talk about other movies. This is a terrible idea as a basis for comedy as it just made me want to go watch better films referenced like Planes, Trains and Automobiles or The Breakfast Club. Neither of those movies needed a talking teddy bear to be funny.

As for the actual jokes, they are only funny by MacFarlane’s standards whose criteria seems to fit a loose structure of being offensive and overdone. Nothing is off limits or too soon in how the comedy picks timely targets including the events of Ferguson, Missouri and the suicide of Robin Williams. Such a comedic nature could feel liberating if the characters weren’t so eagerly on the hunt to say the most crude and offensive thing possible to the point where they’re no longer characters that exist on a plain of reality. The courtroom scenes become so ludicrous with foul behaviour that it made me question why this movie wasn’t just a cartoon. At least then MacFarlane’s gag-to-gag direction would fit some sort of logic.

Is there any heart at all to Ted 2? In very brief, blink-and-you’ll-miss-them moments, we see Ted’s emotional heartache for wanting to be treated equally and not as property. He’s painfully reminded that he was a manufactured toy when he presses his chest to activate a programmed voice chip. It makes you care just a little bit for the offensive bear, but that sympathy is quickly sucked back in when we see him compare his struggle to the slaves of Roots (you know, as a joke). There’s also the returning subplot of Ted being pursued to be kidnapped and dissected for engineering research. This is a plot that seems better suited for a kid’s film as opposed to an adult comedy. Then again, I’m guessing that younger kids are going to find more to laugh at with a talking teddy bear smoking weed and blurting out curse words.

Ted 2, like many sequels of mild success, feels no need to improve on its simple structure of jokes about weed and pop culture. It’s a watered down retread of the previous film with no interesting new developments or change in formula. Weed joke, movie reference, slapstick, racial jab, sexist slam, repeat. Don’t forget to spout an expletive in case all else fails. For a film that wants to be so offensive and vulgar, it comes off as more depressing than shocking. It embodies that one socially inept party goer who tries desperately to be the center of attention. It falls down on its face in a puddle of its own puke, still flopping about for a laugh. I may have gotten one or two laughs out of such a display, but I ultimately just felt sorry for Ted 2 in squandering whatever comedic ideas it may have been capable of showcasing.