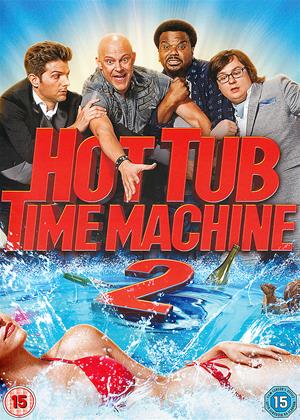 If you liked the first one you will almost like this one......but not quite. Banal America at its worst. Effing and blinding fairly up to the mark though.............

The first film was good, this one sucks male chickens and appendages. Poor story which had me reaching for the remote, but a couple of minutes of it are worth watching if you drive a smart car!

The original Hot Tub Time Machine was a party of a movie. It took a classic time travel concept and milked it for all the raunchy and smart-mouthed comedy it held. But now the party has died down and the sequel has become the awkward guest that won’t leave at 3am. It staggers around in a drunken stupor hoping to recapture some of that wit that was the life of the party. Now he’s just a sad guest who doesn’t know when to leave.

What made the first film so enjoyable was that some unlucky friends were given the chance to change their futures for the better with a hilarious take on Back to the Future. Now saddled with fame and fortune, Hot Tub Time Machine 2 starts the characters out as jerks that have to learn to be a little less jerky. Lou (Rob Corddry) has become the sleazy and hateful founder of his own empire based off Google, retitled Loogle. Lou’s son Jacob (Clark Duke) is still the snarky nerd that can’t catch a break from anyone, recognized by his dad more as a butler. Nick (Craig Robinson) is now a singing sensation, but has issues with his wife. They’ve all been coasting on their successful time travel knowledge and are now spiteful people that should’ve remained in the happy finale of the previous movie.

All of them are portrayed as terrible individuals bound by drugs, booze, sex and money. So are we really supposed to care about a murder mystery scenario where they time travel to save Lou’s life? Why do Jacob and Nick bother saving his life? Just before he was shot, Lou delivered an extremely self-centered speech about how you being a self-centered human being is the key to fun and success. Yes, I get that the characters are supposed to be seen as less moral and need to gain it back, but there is a fine line between establishing characters that are flawed and hateable. This movie seems to delight in how hateable they are right from the start and expects us to laugh at their cruel selfishness.

The three end up traveling to the future to track down Lou’s murderer. When they arrive, everything is turned upside down. Jacob is now the rich playboy he aspired towards, Lou is a bearded hobo and Nick is a washed up artist. While Jacob basks in the shoe being on the other foot, the rest of the crew enjoys the wonders of the future. What technological breakthroughs have been made possible in this timeline? Drugs in the form of stickers, iPads that act as sex toys and virtual reality sex that is never fully explained. To tell the sad truth, these actually sound more likely than a lot of the flashy tech in other future shock films. Cars are now free to hail and drive automatically, sounding the most practical of all the inventions. If only they didn’t have emotional sentience then we wouldn’t have to suffer for the lame joke of Lou trying to gain the trust and love of a car.

To prove you can’t catch lightning in a bottle, director Steve Pink returns to direct this sequel. He’s lost all the steam of the original by falling back on too many safeties. The jokes are almost all centered around sex and movie references without anything clever behind them. This is mostly due to the setting of the gags. These guys have travelled to a different era and they still end up spending a good chunk of their time at a bar with strippers. They later go on a game show which devolves quickly into Nick having sex with another man on television. Old bits such as Lou having sex with somebody and screwing up the timeline pops up. Even Chevy Chase appears for a brief and forgettable cameo as the magical repair man.

With such a tired script, it’s easy enough to see why John Cusack’s character was reduced to an even briefer appearance despite having a strong connection to the plot. All the pluck and laughs of Hot Tub Time Machine has fizzled out with a sequel that plays like an amatuer first draft. It’s just a lazy smattering of jokes that lose all consistency. Jacob makes reference to the television show Fringe to explain alternate timelines. Lou and Nick respond with their running taunt song “You’re a F**kin’ Nerd”, yet in the very same scene Lou compares Jacob’s bald head to an obscure Star Wars character. Go home, Hot Tub Time Machine 2. You’re too drunk on your fifteen minutes of fame to last another round, desperate though you may be for that trilogy.