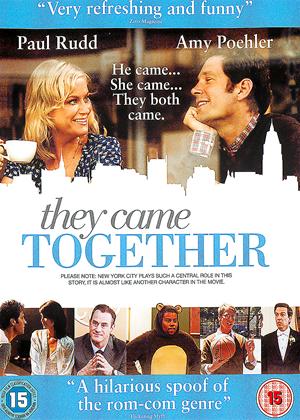 Reviews (1) of They Came Together

Rarely been so gobsmacked by a film, it's a very poor satire and/or a very unfunny parody. But humour is a fickle beast, so you'd probably need to see for yourself and if you dislike it as much as me, it could be a benchmark for misfires. And I quite enjoyed Role Models and Wanderlust.

They Came Together review by Mark McPherson - Cinema Paradiso

Finally, after decades of these romantic comedies that regurgitate the same formula, we finally have a spoof. It may not hit the same heights as Airplane! or Hot Shots, but it comes pretty close in how it savages every aspect of the constant subgenre. Perhaps I’ve just been burnt out on these romantic comedies that never seem to stray off course that something as insanely satirical just hit the right spot. It was refreshing to finally see the usual notes intentionally played up for a laugh.

For most romantic comedies, the story does not matter. Hardly anybody goes to see these movies for the tension of who will end up with who. You know the two leads will become an item right from the poster and you’re only watching to see how the two actors play off each other. But They Came Together makes the story so insane and ridiculous you can’t help but pay attention to the over-the-top nature. The film wears its concept on its sleeve the way the two leads of Paul Rudd and Amy Poehler relay their relationship to their friends over dinner. They laugh as they begin their story stating how it’s like something straight out of a romantic comedy. The initial elements are satirized right from the beginning with the two describing their qualities that make them perfect romantic leads. Molly (Poehler) stumbles through her house as an absent minded klutz and Joel (Rudd) agrees with her assertion that he’s a striking man who is jewish, but not too jewish.

The two of them naturally start off as enemies - Molly runs a small candy shop and Joel works for the corporate candy company that seeks to buy them out. They start out as enemies with mutual friends, but will soon go through the usual motions of the developing couple. They’ll swoon over coffee, fight over flaws and finally confess their love for each other at Molly’s wedding to the wrong man. These are all very common moments in your run-of-the-mill romantic comedy, but writer/director David Wain approaches them with finding some comedic twist. Sometimes he’s clever in how he plays up the absurdity with nonsensical dialogue. Molly and Joel find a common interest at the bookstore in that they both love fiction books. Of course, Molly’s not-right-for-her guy despises fiction novels. Other times Wain goes for simplest jokes as when the couple comment on a waiter having a pole up his butt which turns out to be quite literal.

Wain’s batting average for this script is fairly high on the big laughs, aided mostly by an all-star cast of comedic greats. Bill Hader and Ellie Kemper listen to Rudd and Poehler’s recant with the perfect reactions for trying to decipher just why the couple is telling them all the useless details. Michael Ian Black plays up his sneering cynicism as Joel’s nemesis co-worker who steals away both his promotion and his previous girlfriend. Christopher Meloni gets some great moments to shine as Joel’s dunce of a boss who makes gross mistakes and judges his employee promotions by speeches more than work ethic. And the rest of the cast is a big who’s-who of comedy that includes Ed Helms, Kenan Thompson and Jack McBrayer among others.

They Came Together is the perfect satirical chaser for those strung out on the current crop of romantic comedies that never change and never end. It finds a way to take the genre and turn it on its head. It’s as if David Wain took a Mad Libs approach to romantic comedies and kept writing in goofy phrases all over the template pages. At its best, They Came Together will put to bed some of the romance cliches that are trotted out in this picture for how simple and artificial they really are.