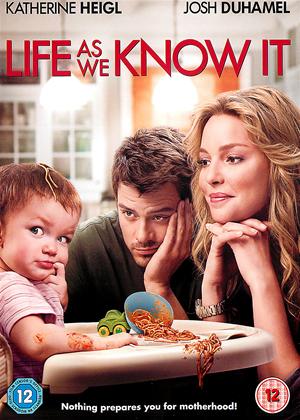 Reviews of Life as We Know It

Life as We Know It review by Melissa Orcine - Cinema Paradiso

Holly (Katherine Heigl) and Messer (Josh Duhamel) are a match in dating hell. Holly’s a manager at an upscale food shop while Messer is a live sports TV director. On a blind date set up by their married friends Peter and Alison (Christina Hendricks), Messer offends Holly to oblivion with his jerky bachelor ways.

They’ve never been friendly ever since, but when Peter and Alison die in a car crash, they are suddenly entrusted the care of their one-year-old daughter, Sophie. The catch: Holly and Messer have to live in one roof or Sophie will go straight to foster care. This is ‘Life As We Know It’, a romantic comedy starring two mismatched characters and a cute baby. Will Holly and Messer be able to stick it out for the sake of the child? Is this a disaster waiting to happen?

‘Life As We Know It’ would have worked as a sitcom and it is actually directed by Greg Berlanti, creator of TV dramedies ‘Everwood’, ‘Jack and Bobby’, and ‘Brothers and Sisters’. On paper, it seems like a viable option. Alas, it’s a movie rife with bickering leads in Katherine Heigl and Josh Duhamel, who have been tasked to raise a child, one of the most important duties parents –in their case, godparents— are supposed to take seriously.

The shrill verbal volleyball between Heigl’s and Duhamel’s characters may be comedy fodder but in the real world, it can be considered child abuse. Its support cast which includes Melissa McCarthy, Andy Daly, and Sarah Burns take on the funny mantle instead, however far and in between their scenes are. Josh Lucas adds to the man-candy for Heigl’s Holly but he is there to look good, not to contribute. To call ‘Life As We Know It’ a romantic comedy is a misnomer.