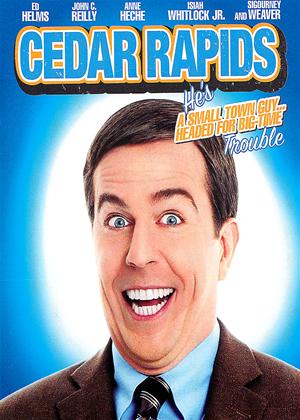 Cedar Rapids is the Hollywood comedy that almost never was. It appeared on the 2009 Hollywood “Black List” (a list of the year’s most popular un-produced screenplays) and finally began production the following year.

The film stars television regular Ed Helms as an insurance salesman, Tim Lippe, who is sent to an award ceremony and conference in Cedar Rapids,Iowa after his superior, is found dead after a strange sexual encounter. Along the way he meets fellow insurance agents Ron (Isaiah Whitlock Jr), Dean (John C. Rielly) and Joan (Anne Heche) and, unsurprisingly, finds himself involved in all sorts of trouble; including an encounter with a prostitute, drugs, and bribery.

The film is incredibly generic, and that is often quite pleasing at times as the jokes made at the characters expense help to make them a little more endearing, whilst the other comical elements are derived greatly from a sense of the sheer ridiculousness of the film.

There is little substance to the film, and its appearance on the Black List is most likely due to its generic tropes and predictability; these are the things that make money, these are the things that make studios happy. Yet it is not a bad film as such, it is exactly what you would expect, straightforward, simple comedy; I’m sure there are many an eighteen year old boy who will be quite happy to while away an hour or so with Helms and Cedar Rapids to keep them company.