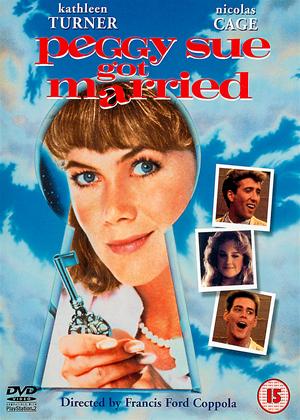 Reviews (2) of Peggy Sue Got Married

Peggy Sue (Kathleen Turner) faints - and wakes up in 1960, still in high school and debating whether to marry boyfriend Charlie (Nic Cage). She finds out that her knowledge from the future doesn't seem to influence things much - but she does manage to pass on a few money-making tips to the local geek, who becomes a future v rich man. And back in the present day Peggy Sue and Charlie's relationship blossoms once more. Err that's it.

I suppose it could be classed as a rom-com, Nic Cage wants to be a rock 'n' roll singer (but fails to make it big), Kathleen Turner looks good as always, and it's a middle-of-the-road enjoyable film. Enjoyable yes, but excellent? Hardly. So why was it nominated for not one but three Oscars? [Aside: 1987 was the year that Oliver Stone's 'Platoon' won both Best Picture and Best Director]

Nic Cage has made some awful films lately (two being nominated for Razzies) but this shows that once upon a time he was almost good, even with a v strange voice. Kathleen Turner is good, but frankly it's not a Best Actress performance. The direction is good, but in my opinion director Francis Ford Coppola's best films ('The Godfather', 'The Conversation', 'Apocalypse Now') were already behind him and the film is full of clichés.

Look out for an early bit part for Jim Carrey.

I enjoyed it, it's entertaining enough - but it's fairly average stuff and also very American. 3/5 stars.

This is an enjoyable romance / time travel / 50's period piece film which is easy going and doesn't cause you to think to deeply. I remember really liking it when it came out but now I feel it just doesn't do the light-hearted time travel as well as Back to the Future nor the 50's period piece as well as American Graffiti (the George Lucas film which Frances Ford Coppola actually produced). SO if your looking for a feel-good film for a family night this has to be in the running.