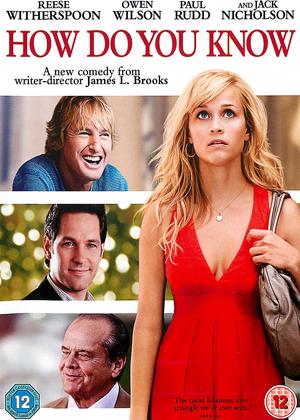 Reviews (1) of How Do You Know

CINEMA PARADISO - How Do You Know review by CP Customer

The film was not great and as this rubbish company insisted on sending it to me twice I was not impressed!! I have had this service running for 4months and have recieved 3 dvds (2 of which were the same film) Absolute outrage that this company has taken my money and not provided the service that they was supposed to!! Do your self a favour and do not join this RUBBISH service!!!

How Do You Know review by Melissa Orcine - Cinema Paradiso

Director James L. Brooks returns with another offbeat romantic comedy in the vein of ‘As Good As It Gets’… well, it tries to be and unfortunately, it’s not even close. ‘How Do You Know’ is about Lisa Jorgenson ( Reese Witherspoon), a 31-year-old softball player who has been cut out of the US national team. Dejected and angst-y, she jumpstarts her stagnant love life instead. She begins dating pro baseball player Matty Reynolds (Owen Wilson) and even gets asked out on a date through phone by businessman George Madison (Paul Rudd).

Matty is a charming guy but he’s a believer in casual affairs. Meanwhile, George is being touted the fall guy for a corporate scam that his father Charles (Jack Nicholson) orchestrated; add to that, he just got dumped by his girlfriend so George is an emotional wreck unfit to be dating right now. Between Matty the laidback millionaire playboy and the troubled yuppie George, Lisa must figure out who she wants to end up with and what kind of future she must have.

Apparently, ‘How Do You Know’ is supposed to be a screwball romantic comedy. Indeed, there’s an attempt to not go the formulaic route for this genre, but it’s quite futile because you end up being scr***d by the movie. You are made to ask after viewing: ‘What’s the point exactly? Why did Oscar-winners Reese Witherspoon and Jack Nicholson star in this – do they need the money? How come only Paul Rudd and Owen Wilson read the memo to be funny?’ Seriously, where’s the romance, where’s the comedy in this?

A little tweak here and there could have done the trick. The cast is capable enough of making something out of a nothing-script. James L. Brooks shouldn’t have tried too hard so it didn’t look contrived. And how unrealistic – Lisa wants to fix her life, she feels she’s become a disappointment, and her next step is to start dating, to find the man of her dreams, to complicate her life even more by piling on the drama?